From IndieWeb
(Redirected from via)
Jump to navigation Jump to search

giving credit is a collection of cultural practices related to acknowledging and attributing text, hyperlinks, quotes, utterances to others, typically by name, as a way of recognizing their contribution(s).

Perhaps the most common form of giving credit is directly citing (and linking to, for online source) the source of some text, concepts, or ideas.

via is a commonly used label to note through what or whom content was first discovered. E.g. if A posts a photo, B publishes a post mentioning (or liking or reposting) it, which C sees, C might post something like "Look at this cool photo by A! (via B)", where B can either be linked to B's profile or the specific post they saw. Sometimes, this can form a long path until the actual source is reached.

“Via” ᔥ tends to denote a direct repost — something you found elsewhere and shared with your audience with little modification or elaboration.

When passing on or repeating text and/or URLs on Twitter (or POSSEed notes) from a source on Twitter, the person repeating the content often uses "via: " literally in text (without quotes), followed by that person's Twitter @-name, rather than citing the specific tweet.

When passing on or repeating text and/or URLs on Twitter from someone who provided the information but not on Twitter (perhaps they spoke it outloud, provided it in IM/IRC to you, or provided it in some other online source that is lengthier or on another or more general topic), the person repeating the content sometimes uses "hat-tip: " followed by the person's Twitter @-name. More often the abbreviation "ht: " is used to save space.

The same reason(s) as for using "via:" can justify using "ht:" with @-name instead of linking to a permalink or some other sort.

Curator's Code defined it as

“HT” ↬ tends to stand for indirect discovery — something for which you got the idea at your source, but modified or elaborated on significantly when sharing with your audience.

no known examples explicitly marking this up. A potential consuming use-case could be recommendation tools (see why/social discovery above)

Some websites publicly credit the application used to create a piece of content. Typically this is indicated with text such as "via" or "from" or "using" near where the date of the post is displayed. Related:

Jamie Tanna has been doing this since 2020-05-13 (announce post) with the following examples:

Jacky Alciné has been presenting h-app information as generator information since 2022-03-15.

when the information about the app is available.

when the information about the app is not yet available.

This is done using Koype fetching the information from Sele about the provided token used for the request. Shock provides placeholder information when it doesn't see any information yet. 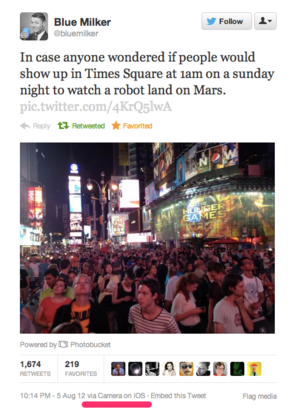 This is still available in [https://dev.twitter.com/rest/reference/get/statuses/user_timeline#%22source%22 their API, as the source of a tweet. 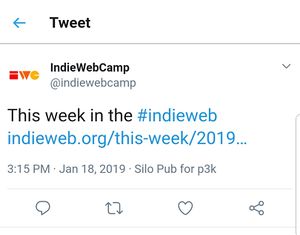 Facebook credits applications by adding the application name after the time of the post with a single bullet separator.