From IndieWeb
(Redirected from dedupe)
Jump to: navigation, search

deduplication (de-duplication AKA deduping/de-duping) is the process of comparing responses (sometimes posts) and seeing if they are exactly or essentially the same, and only keeping the earliest or most canonical version, perhaps keeping track of alternative URLs, like syndicated copies.

How to deduplicate responses

Replies and other responses are often duplicated in different places, e.g. via backfeed of POSSEd replies by Bridgy. Ideally, recipients should try to de-dupe webmention sources, preferring an original post (see below). Getting this perfect is hard, but getting close is pretty easy (see one IRC discussion and another) by both:

Kyle Mahan de-duplicates comments on his site since at least 2015-06:

Aaron Parecki de-duplicates comments on his site since 2017-09-01, with a partially working implementation since ~2016 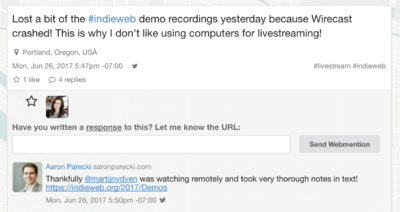