The Webmention spec includes the possibility of creating a status page if processing a webmention asynchronously. This enables a sender to have a way to check on the status of whether their webmention is verified.

If a receiver returns a status page, the spec says to respond with HTTP 201 and a Location header, e.g.

The contents and format of this status page are not specified, as there were no consuming cases implemented at the time of standardization. The goal of the status page is to give senders a way to know whether their webmention sending was successful or why it failed. People have implemented a variety of different ways this information is returned at the status URL.

IndieWeb community members who have implemented either serving status pages or consuming them: 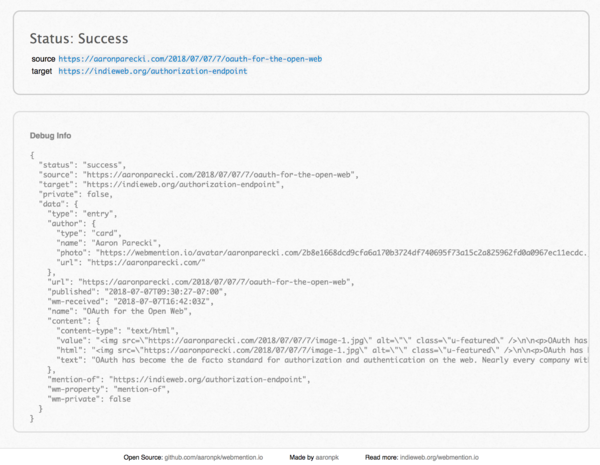 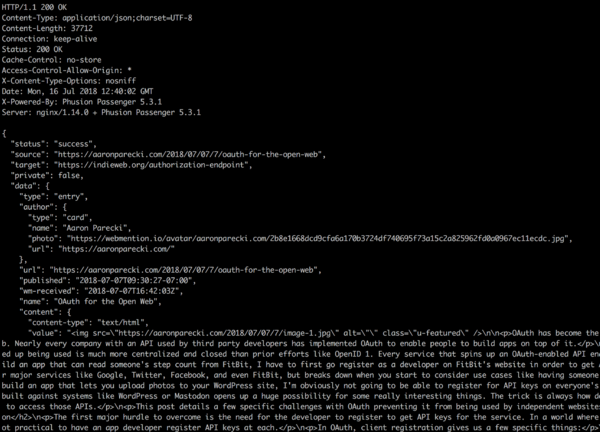 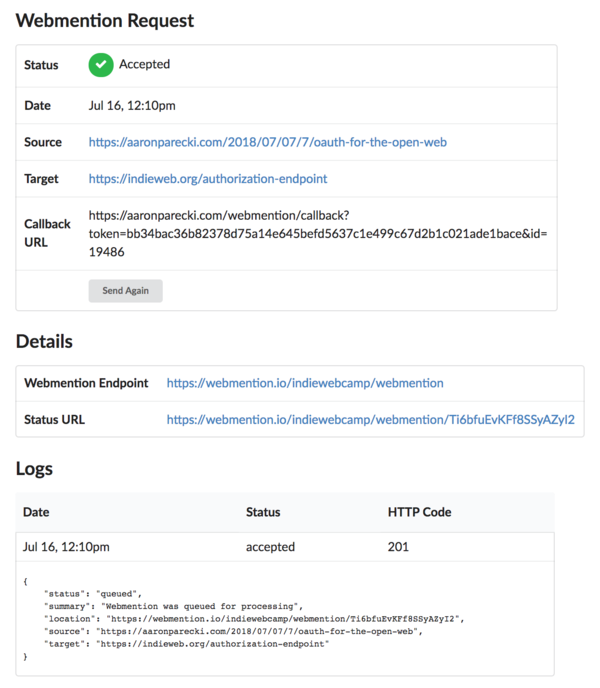 When verifying a webmention by checking the source site, include an X-Forwarded-For HTTP header in your request, with the value set to the IP address of the client that notified your server of the alleged webmention.

where $sender_ip is the IP address of the incoming request that informed you of the webmention and $source is the source page of the alleged webmention. Then check the response to see whether a link to $target is present.

Note: WordPress is using X-Pingback-Forwarded-For to mitigate abuse of pingbacks. And IETF is also in process of standardizing a Forwarded header (with a more detailed semantics). If someone feels strongly, we could pick one of those or mint something new, but in the meantime, use X-Forwarded-For.

Asynchronous status polling could be achieved via the webmention receiver returning a LINK header with rel=status with a URL for querying the status of a specific pending webmention request.

Then the sending of the webmention could poll that URL for updates on the status of that particular webmention.

This would say that the webmention is still in the state of "accepted" but has not processed yet. This also leaves the page body open to any formatting for the user's view.

Asynchronous status notification could be achieved by using a webhook in the initial webmention request.

I.e. in addition to:

Webmention receivers that support the callback URL could acknowledge that it will eventually send a POST to the callback by responding to the webmention request with either (tbd): a specific HTTP code, an HTTP header, or something in the body of the response.

The Webmention receiver would then send a POST request upon completion of processing of the webmention, with a "status" query parameter indicating the outcome of webmention processing. See "More status codes" below for possible values for that parameter.

To deal with the variable response body problem:

propagation to a mobile device

To make webmentions more useful, it would be great if there was some way to have them propagate as notifications to whatever devices the user has setup to receive such notifications.

Good retry logic can be hard, regardless of what you're doing, and webmentions are no exception. Here are some current practices we use to retry HTTP fetches for webmention endpoint discovery, sending webmentions, and fetching source pages to check backlinks.

A webmention endpoint getting too many requests, potentially from a single source, should be able to communicate this to senders, asking them to retry later. (note that it might be necessary to rediscover the endpoint, maybe comparable to caching)

If a single sender is sending to many requests, HTTP 429 (Too Many Requests) seems like the apropriate response. In other cases, HTTP 503 (Service Unavailable) can be used to signal temporary failure. Both allow a Retry-After header to give a hint when new submissions are accepted.

The webmention specification currently doesn't mention how responses other than 400 & 500 should be treated.

For senders that are directly triggered by a user that can not retry later automatically, it might make sense to displays those temporary errors differently to the user than more permanent errors (like a missing WM endpoint), prompting them to retry manually later.

Endpoint By Page on Same Domain

Pages that do not support webmentions should not advertise an endpoint, even if the domain in general does.

Webmention spam is not (at time of writing) really a problem; it'd be nice to keep it that way. A proposal: add a hashcash-like "proof of work" to a webmention request. In essence, this is a calculation which takes a little time to do; not enough to impact an individual sender, but enough to make large-scale webmention-sending (i.e., spam) problematic.

Proposed approach (suggestions from crypto people are welcome!) In addition to source=http://source/article&target=http://target/whatever POST parameters to the webmention endpoint, also pass two new parameters: time=1417292519&nonce=5684712. The time parameter is UTC epoch time (seconds since 1970), and the nonce is calculated such that sha256(target + "-" + time + "-" + nonce).hexdigest() startswith "000000". The number of zeroes required can be varied before specifying this approach to "tune" the difficulty of creating a nonce; the above (6 zeroes) takes some seconds on a reasonably modern machine.

A webmention endpoint then checks that sha256(target + "-" + time_parameter + "-" + nonce).hexdigest() really does start with "000000", and that time is not too long ago (to prevent replay attacks; "not too long ago" is intentionally vague here because one must consider clock drift and so on).

Possible alternative: set up hashcash-for-vouches.com where one submits the proof of work to h-f-c.com and if it verifies, h-f-c then vouches for you as per Vouch. What should then happen is that if people generally agree that h-f-c is requiring a proper proof-of-work, everyone whitelists it. So it's all done on the back of Vouch, but it doesn't have Vouch's clique problem.

A working implementation of this is at Hash for Vouch and described in detail there and on kryogenix.org.

Why not just attach a hashcash to the webmention itself?

If you were sending a webmention from http://example.org/a to http://another.example.org/b, you'd take the target URL, calculate a hashcash for that URL, then send that as an extra parameter in the webmention.

To specify the hashcash bit level, we could use a meta tag like this:

If you get a hashcashed webmention and you do support it:

If you get a hashcashed webmention and you don't support hashcash, simply ignore it.

Several individuals have implemented webmention status pages, but what about a permalink for the webmention itself?

If you receive a webmention from a web page that requires authentication to access it, the normal webmention verification process will fail. What is the best way to have the webmention endpoint authenticate as the receiver's website to be able to fetch the private page?

checking endpoint once per domain/caching the endpoint

Currently the spec requires webmention discovery on every URL you want to send a webmention to. If your post links to three separate notes on the same website, for every webmention you need to check the note’s page to discover the correct endpoint even though these are likely to be the same. Would it be safe to assume only one endpoint per domain? (From IRC 2015-06-15.)

Sandro Hawke and I (

Shane Becker) discussed what to store (irrespective of how one stores data, i.e. database, html+mf2, etc) one night after IndieWeb Summit 2016. This is what we came up with.

Then you should process that blob from the source. If you can learn additional information about the source's post type, you should store that (rsvp, photo, note, etc). Then process the blob for type specific properties.

Even after processing the source blob and saving parsed properties, you should keep the source blob in case you want or need to process it again in the future with some new understanding or new requirements.

Webmention senders may wish to keep track of the status of webmentions they send.

We've thought a lot about backfeed for silos and POSSE copies. How would backfeed work for "pure web" syndicated copies that aren't the original post, but fully cooperate with web standards and indieweb protocols as much as possible? Here's a sketch.

First, on the webmention sending side, when a sender fetches a target link to perform webmention discovery, it could also look for a rel-canonical link. If one exists, it would then send a second webmention to that rel-canonical page, with the same source URL.

Second, on the receiving end, when an incoming webmention's target URL isn't found in the source page, the receiver should also look for known syndicated URLs, e.g. u-syndication links. If one is found, the receiver would then handle the webmention as if the source linked to original post URL.

What do people think about receiving a webmention for a POSSE copy?

Kind of a semi manual backfeed without Bridgy that is.

Motivation: webmention to tweet posse copy was motivated by manual backfeed to add a reply to a posse tweet that Bridgy apparently missed (probably due to Twitter's flaky search API, which Bridgy has to use since they have NO REPLIES API)

which do not appear as replies on the original post

As this doesn't affect existing compliant implementations, it should be backward compatible.

It should also be an extension that sites can implement immediately and try experimenting with.

One way to implement it would be something like:

Some websites supports syndicating posts, in part or in full, such as Medium, Dev.to, Lobsters, Reddit, etc. Many of those also provide a commenting feature, which is one of the motivations for people to syndicate their posts there in the first place. Those syndication destinations could support webmention natively rather than having to build a third-party webmention proxy service to handle it like Bridgy. In that case, here are some thoughts on how those services could support webmentions to send comments back to peoples' original posts.

Here is the example markup for Dev.to showing what needs to be added in order to have a comment on Dev.to work as a webmention:

Here is how a Microformats parser will see that page:

Note on the optional steps: A simpler option could be to have Alice verify her domain once at Dev.to, then Dev.to will only send comments back to the canonical URL if the canonical URL is on the same domain. This is slightly less strict than checking every post, but means authors don't have to have the ability to link to syndicated copies.

Because of the benefits and flexibility the discovery step adds, we need to stick with it and can't use the LINK verb as cool as that might be.

Webmention, like Pingback, is a vulnerable vector for DDOS attacks. See DDOS for more discussion and proposed solutions.

Asynchronicity: a server may want to queue webmentions for source retrieval processing and do that asynchronously with the request. It's not always practical or advisable to handle all that processing in the actual HTTP POST thread. Thus receivers of webmentions must not be required to return no_link_found errors. - Tantek 14:53, 13 August 2013 (PDT)

repeat webmentions not an error

Updates: it's acceptable to send a repeat webmention, e.g. for updating or deleting comments. Thus the already_registered error must not be required, and should likely not even be an error in the first place. - Tantek 14:53, 13 August 2013 (PDT)

De-duplication (AKA de-duping deduping): replies and other responses are often duplicated in different places, e.g. via backfeed of POSSEd replies by Bridgy. Ideally, recipients should try to de-dupe webmention sources, preferring an original post.

Does it make sense to allow rel=webmention on anchor tags in addition to link tags?

These libraries and implementations support <a> webmention endpoint discovery

These webmention endpoints show human-friendly information, when visited with a GET request

Similarly, in an asynchronous interaction, the callback webhook should include a "status" URL query parameter with the status codes noted above.