A Facepile is a way of showing interactions for a page/site by using profile pictures. It is a design element popularized by Facebook.

It consists of a row or rows of profile photos of individuals who have all completed a webaction involving the current page/site. For example, who have all liked, mentioned, favorited, RSVPed, etc.

Software that displays facepiles should take care to display only one image per actor within a given facepile. For instance, someone might, using webmentions, send two likes from two discrete source URLs to a valid target URL on a website. Rather than display that person's picture twice on that URL's facepile for likes, it should determine that both webmentions came from the same author (using the authorship algorithm), and then display that person's image only once within its like-facepile.

Aaron Parecki has displayed a facepile for likes and retweets since Feburary 2014. 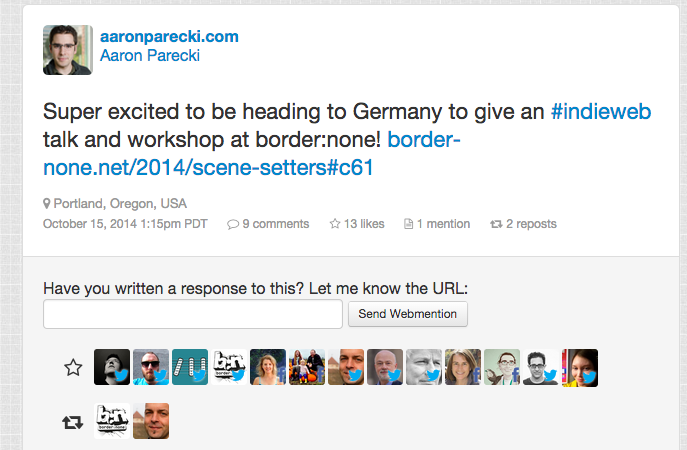 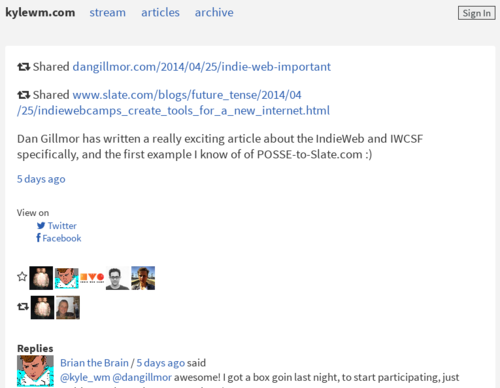 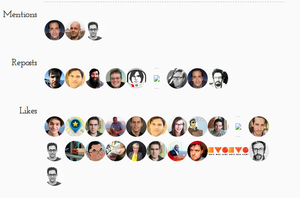 Pelle Wessman since 2014-12-30 using a new experimental embed from his WebMention service webmention.herokuapp.com.

Sebastiaan Andeweg uses facepiles to show likes, reposts and bookmarks for his post. For events, he also uses a facepile to show RSVPs.

Likes, reposts and bookmarks are mixed into one pile, but the text above the pile only counts the likes. When there are reposts/bookmarks but no likes, the title will say 'Reposts en bookmarks'.

RSVPs are displayed with an icon indicating 'yes', 'no', 'maybe' or 'interested'. Only the 'yes' value is in color.

Chris Aldrich began using facepiles on his WordPress site on 2017-10-06 utilizing the new functionality of v3.5.0 of the Semantic Linkbacks plugin. Further details and images are documented here.

fluffy uses facepiles to show reactions to entries, via webmention.js

capjamesg displays facepiles on his website below all posts, including articles and notes. 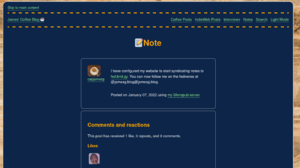 As of November 2014, Twitter displays its Facepile as a count of the different types of actions, and a Facepile of the individuals who took action at all.

WordPress.com (and self-hosted WordPress.org sites using JetPack) allows the display of facepiled likes within their platform.

From the USA Today article: Republicans are hit the hardest as coronavirus spreads among elected leaders, using clusters and two colors to give a broad impression of a trend: