A reply (or comment) is a kind of post that is a text (typically, though photos are possible too) response to some other post, that makes little or no sense without reading or at least knowing the context of the source post.

Replies rarely have names/titles, though they sometimes have other structure like multiple paragraphs, or blockquotes from the source that are being specifically responded too.

For details on displaying replies/comments on websites, please see:

Why reply on your own site

You should post replies on your own site so you can own your replies, regardless of what happens to the page or site you were commenting about.

Why send webmentions for replies

You should automatically send webmentions to links you're replying to, to participate in federated indieweb commenting on others' sites! (this is a big milestone for any indieweb implementation)

Why fallback to pingback

If the thing you're replying to lacks a webmention endpoint, you should automatically look for a pingback endpoint and send that instead (e.g. in HEAD/GET results), to support posting comments on indieweb community member's sites that receive pingbacks but not webmentions,

How to publish an indieweb reply in response to an original post:

2. Link to the original

3. Send a webmention from your server to the original's server (as detailed below). Ideally your server/software should automatically do the (3) webmention for all links in your post.

Here's another example with explicit author name and icon, in case your site or blog does not already provide that on the page.

For those with less experience with code,

Aaron Parecki has written Sending your First Webmention from Scratch which includes a lot of additional details for sending replies.

Setting the silo-specific reply-to on POSSE copies helps silo readers better understand/follow what you're replying to When B posts a reply to A's post and sends a webmention, and both A and B POSSE their posts, wherever they happen to both POSSE to (e.g. on Twitter), their POSSE'd copies link-up there as well. That way those on the silo (e.g. Twitter), will be able to follow the conversation, even when A and B are replying/linking directly peer-to-peer between their indieweb posts.

As an implementer, consider this in question form:

Auto-discovery of an original post from its POSSE'd copy that you're replying to:

How to display your own replies / comment posts on your own site.

(This section could use expansion, details)

When you update a reply post on your site:

If a server receives a webmention for an existing comment, the server should:

When you delete a reply post on your site, you server should send webmentions to all the links you mentioned in your post.

When your server gets a request for the permalink of the reply that was deleted, it should return the 410 GONE HTTP status code.

Even better would be if original post(s) had a "Reply" webaction button which upon clicking, took the reader/commenter to their own blog's posting interface, with a (2) Link to the original (to make a comment) already pre-filled-in to which the commenter could simply add text commentary and then post.

So you've implemented accepting webmentions, now how do you display them on your site?

tl;dr: reply is the post type, a comment is a reply syndicated into the context of the original.

Is a "reply" (or are replies) just a special case of a comment?

Whereas comments only sometimes start with an explicit name reference.

Another distinction (perhaps useful for indieweb discussions) is context:

IndieWeb community members's replies (comments) on their own site in reference to a post on some other site:

Best practice - threaded POSSEd tweets - replies posted on the indieweb site and POSSE'd to Twitter such that the syndicated tweet links back to tweet that is being replied to - thus threading the tweets together on Twitter and providing a good experience there.

Adhoc / prose replies - prose and inline links being used to indicate what's being replied to:

Whilst most commenting implementations allow comments on the post level, an increasing number of silos are allowing granular comments on, for example, words, sentences or paragraphs:

IndieWeb examples of displaying a reply post to a single original post (that original itself shown (partially) as context on the reply permalink) :

When Kimberly Hirsh hosted her site on WordPress, she posted threaded replies to micro.blog from the comments of kimberlyhirsh.com, using a link to the original micro.blog reply with the u-in-reply-to microformat as described in Chris Aldrich's post, "Threaded Replies and Comments with Webmentions in WordPress." 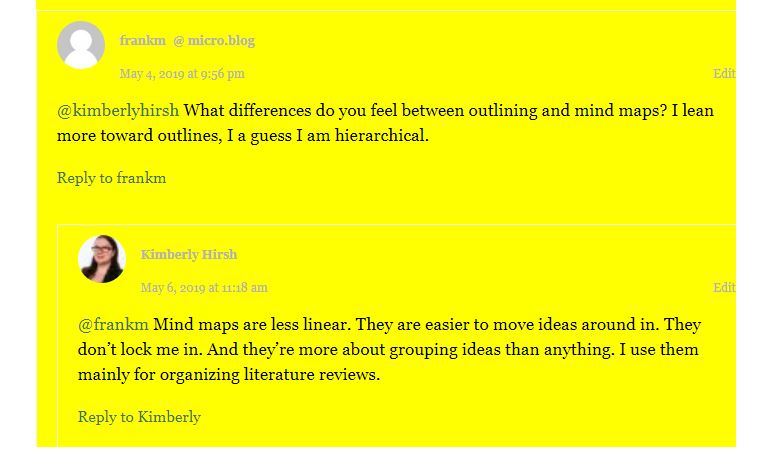 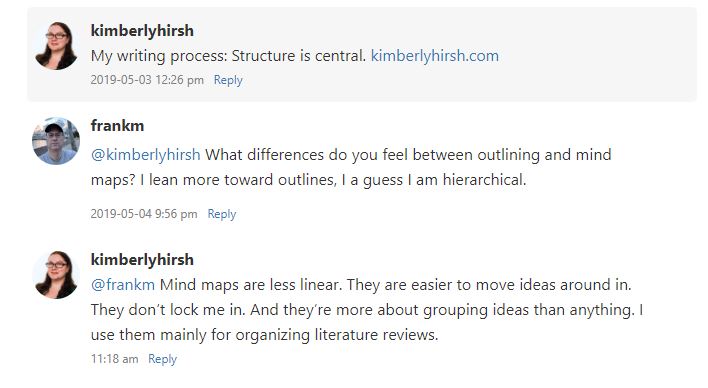 Tumblr replies must all be posted by the person replying to their own Tumblr, and have the form of "reblogged this and said ...".

Some people have criticized the idea that comments should be written in a space the author owns rather than written on the thing being commented. There are pros and cons of each method.

Many people (who? citation(s) needed) don't want their replies/comments to show up in the list of their normal posts.

Contrary prior art: The following systems/services established a UI (and culture of) requiring that reply posts be "in your own space/profile".

Solution: Don't include your comments on your home page feed

Solution: Use a separate folder or subdomain for comments

There seems to be 3 different elements of a tweet that are distinguished by an @-reply versus a quote tweet.

tl;dr: use u-in-reply-to in your reply h-entry, and avoid using rel=in-reply-to as it’s been abandoned.

microformats u-* classnames are scoped to the closest ancestor with class=h-*. Therefore on a page listing replies it would make little sense to have rel=in-reply-to links for all the replies on the page as they’d all be scoped to the list page, whereas it’d be completely appropriate to have u-in-reply-to properties on each h-entry, and on individual post permalink pages with only one h-entry. rel attributes are scoped to the entire page, so rel=in-reply-to was both less useful and required extra care to use properly, thus made sense to avoid entirely and was abandoned.