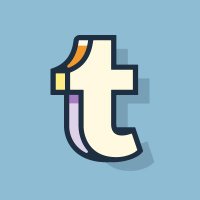 Tumblr is a popular content hosting silo, especially for found images & video, that explicitly supports multiple types of posts, and through free domain mapping, a content hosting service as well.

The "Tumblr" names comes from an early term for short-form blogs, tumblelogs, which later became popularly referred to as microblogs.

There's a lot you can do with Tumblr and the IndieWeb, the "how tos" here are clustered into two chunks, first, as how to use Tumblr as an domain aliasing web hosting provider. The second cluster is for if/when you have your own site independent of Tumblr, and want to (still) interact with posts / people on Tumblr.

These two major clusters are separated by how to "Export", which you'll want to use as part of switching from Tumblr as a web host, to more independent web hosting, and subsequent usage of your Tumblr as merely a POSSE/backfeed proxy.

Use your own domain

Add rel-me links and use IndieAuth

On your Tumblr page, click the Customize button, then add rel-me links as HTML directly in the Description section. More details.

You can use this snippet to do so:

Tumblr has documentation on How to create a custom HTML theme which you can use to add microformats support, especially h-entry and h-card.

There is a indie web version theme already marked up that you can use. Click on the Edit HTML button and copy and paste this over the existing html.

You can use the Link feature of Tumblr to send indieweb replies:

Find the section starting block:Link and change it so it looks like this.

To reply to something copy the URL and make it a tumblr link. You will need to manually send webmentions or sign up for Brid.gy

You can also mark up your photos and photosets with microformats.

The following Tumblrs have proper h-entry markup (per the above instructions) and thus may help as examples:

Tumblr doesn't have built in support for webmentions, but Bridgy can send, receive, and display webmentions for Tumblr blogs. You can also receive webmentions with webmention.io and webmention.herokuapp.com.

It is possible to use Micropub clients like Quill to post to blogs on Tumblr using silopub as a bridge. You have to host silopub yourself (there was a service silo.pub in the past which since went offline) and follow the instructions to include the appropriate headers. Then you will be able to log in to any Micropub client using your Tumblr domain as your identity.

The Tumblr API provides XML and JSON for posts. Tumblr's v1 read API is blissfully simple to use although now deprecated. It returns custom XML but it is fairly straightforward to transform this into HTML etc. The v1 API doesn't require authentication.

Public feeds are available of Tumblr sites at the path "/rss", e.g.:

Tumblr used to be able to import an RSS feed; they removed this ability in 2011 according to "Tumblr Removes RSS Import Feature, Becomes Far Less Useful".

How are people POSSEing to Tumblr today? Presumably using their API? Or email?

silo.pub supports Micropub to Tumblr, thus if your server can act as a micropub client, it can automatically POSSE your posts to Tumblr.

Bridgy Publish does not yet support POSSE to Tumblr, but there is an open issue on it if you'd like to help make it happen!

When posting a reply to a Tumblr post, the proper POSSE behavior should be to do a native reply (on Tumblr) of the post that you're reposting on your own site.

When you do a reply to an indieweb post:

When posting a repost of a Tumblr post, the proper POSSE behavior should be to do a native repost (on Tumblr) of the post that you're reposting on your own site.

Considerations: Reblogging specifically has to be done through the [4] which requires oauth and cannot be done through their email posting service. This is because posting a reblog requires the system to first api fetch the original post that is being reblogged to get it's "reblog_key" that must be sent with it's post id when making the reblog call.

When you do a repost of an indieweb post:

When posting a favorite of a Tumblr post, the proper POSSE behavior should be to natively "like" (on Tumblr) the Tumblr post that you're favoriting on your own site.

Tumblr allows users to set-up auto-syndication of Tumblr posts to Twitter. The UI used for this may be of some use to those implementing POSSE (although it isn't POSSE as Tumblr isn't your "own site", unless perhaps you're using Tumblr as an indieweb host for your domain). See this Webapps StackExchange post for details of the UI of Tumblr's Twitter syndication.

In Tumblr's rich text editor, the formatting buttons appear when you highlight text. When the cursor is on a blank line, options to add media appear. Tumblr staff explained the thinking behind their editor in "A More Pleasant Post"; it launched sometime before 2015-02-13.

As the above "How to"s document, there’s a lot you can do to make your Tumblr IndieWeb Friendly.

This section documents built-in IndieWeb support in Tumblr, and efforts to add more.

Tumblr posts can be roughly mapped to IndieWeb posts as follows:

Has anyone deleted their Tumblr account? What's the process? How long do they hold your data anyway? Etc.

Getting data out of Tumblr is pretty easy as documented above. There is no need to get or use API keys or OAuth tokens or anything.

This makes Tumblr a logical destination silo for a PESETAS setup.

Tumblr has (sometimes inexplicably) reassigned a username (and thus *.tumblr.com URL) to someone else, without explicit permission of the original owner / creator of the username and tumblr URL.

After some period of inactivity, Tumblr will send an email that requires user action, otherwise their username can be released, breaking permalinks. The message they send is:

It's been a while since you've been on Tumblr, and we wanted to make sure that you're still interested in using the username [username]. If so, just hit this button:

If not, you don't have to do anything. If we don't hear from you within two weeks, we'll just give you a temporary username and release your old one back into the wild. You can come back and change your temporary name to whatever you want, whenever you’re ready. Your content will all still be here when you get back. 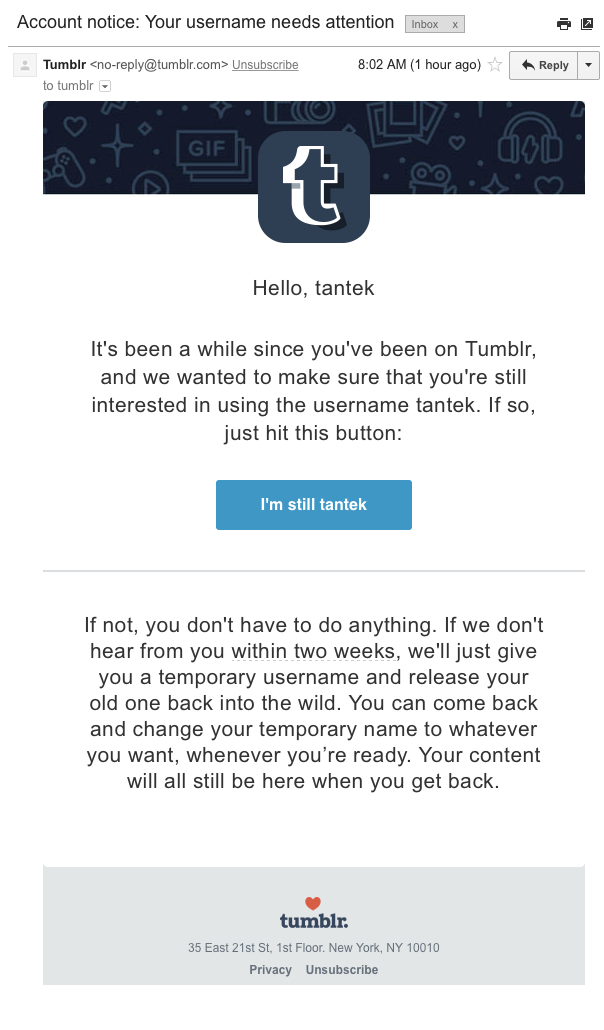 This is obviously bad for longevity, and makes Tumblr a less attractive free hosting option.

If you do click the [I'm still Username] button in the email, you're taken to a web page that asks you to reset your password: 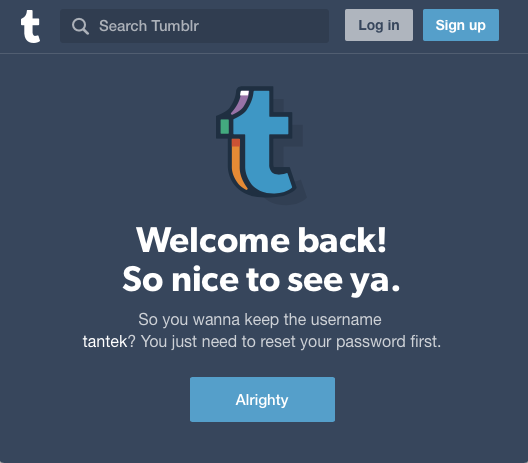 When you click [ Alrighty ] it take you to another screen where it shows you your login email, and just one field to pick a new password. No old password, no confirm new password, and just accepts it without confirmation.

"Over the next week, the terminated teens created a huge Facebook group chat; its thousands of messages are filled with anguish and denial and regret: “They took away our lives,” and “The worst part is that everything was just ripped out from under us.” " [5]

In the dashboard view of your own quote post, it looks like you're quoting yourself, which is misleading:

Even worse, reblogs of a quote post look like they're being said by the reblogger, which is doubly indirectly wrong. 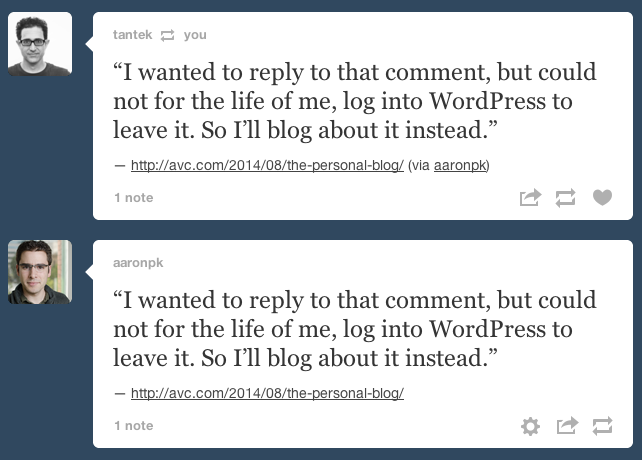 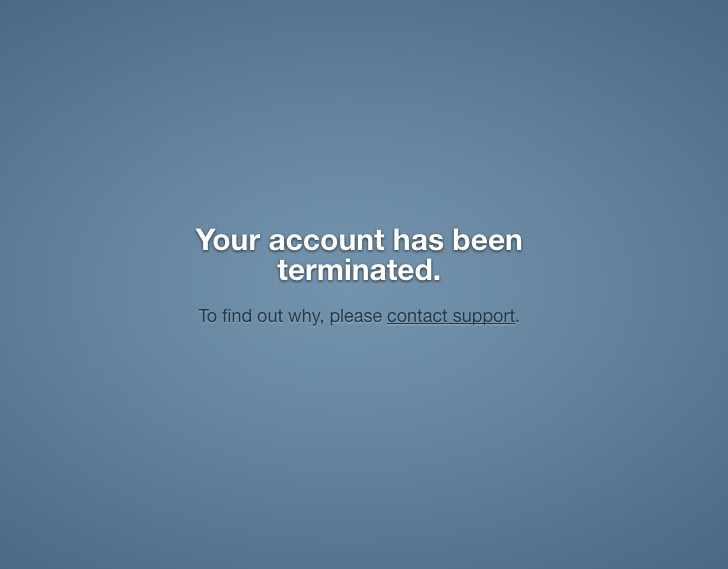 As of 2014-09-09, Bloglovin reported in a Facebook status (archived) that Tumblr feeds were available again.

Primary vs Secondary blogs and contributors

As of 2022, large portions of Tumblr’s functionality is gated behind login walls. Gated content includes blogs marked as sensitive, scrolling more than a few pages down search results, trying to click on any content in search results despite that content being public and visible in the results. 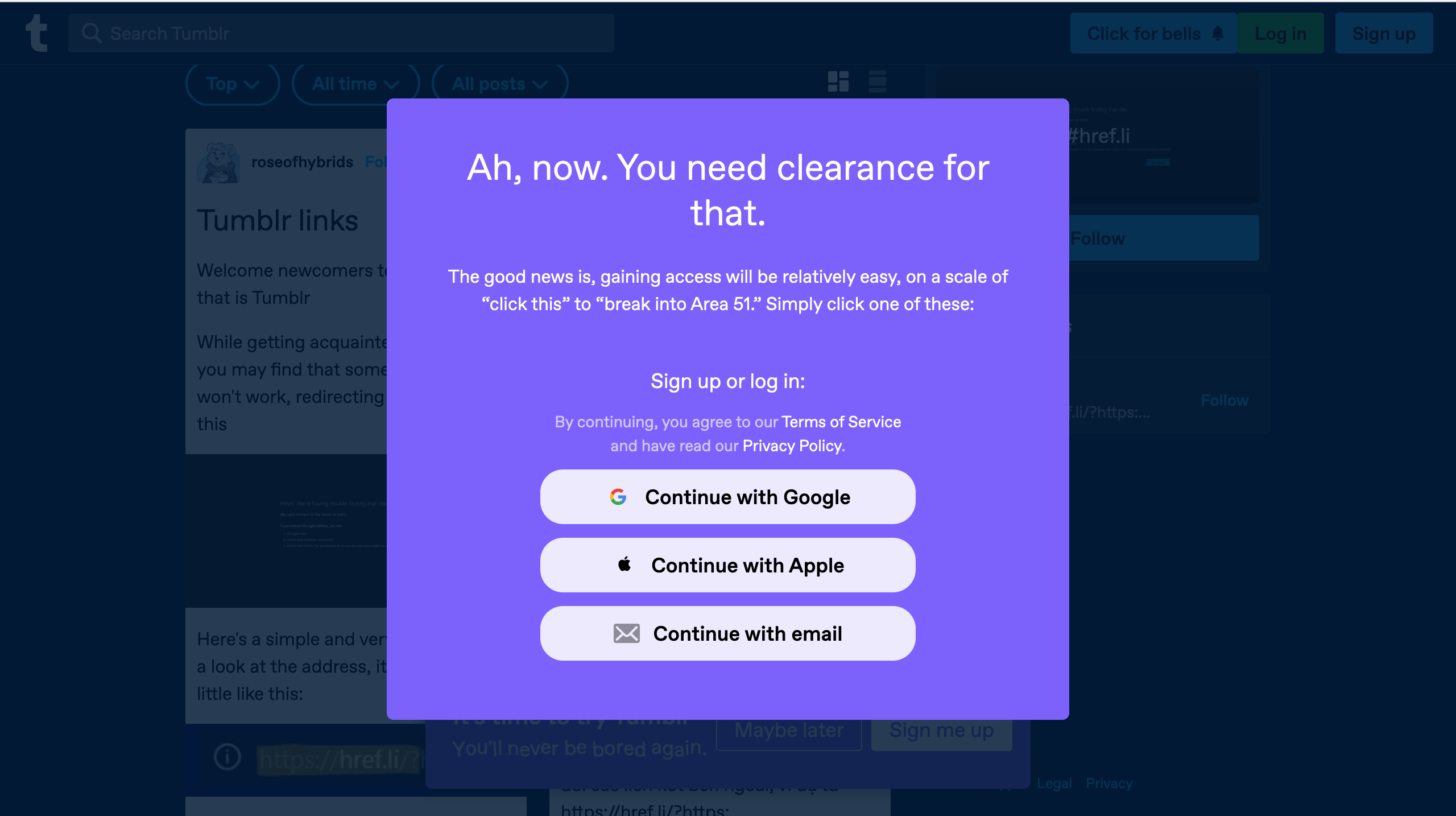