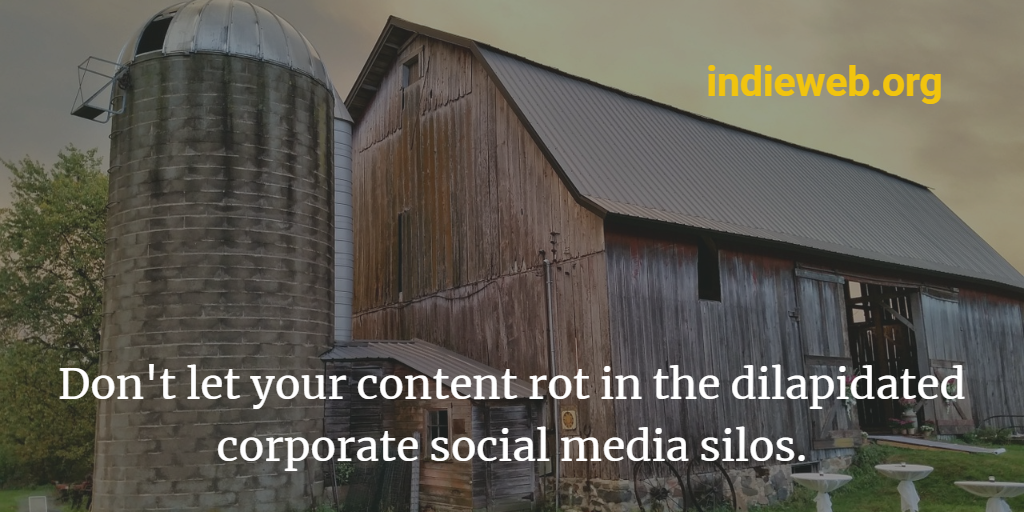 A silo, or web content hosting silo, in the context of the IndieWeb, is a centralized web site (like most social media) typically owned by a for-profit corporation that stakes some claim to content contributed to it and restricts access in some way (has walls).

Silos are characterized by the following:

What are the silos? Control. The silos are computer-generated dream worlds built to keep us under control in order to change a human being into this.
[holds up chart showing clicks on ad units]
(with apologies to [1])

For a brief history of the rise and fall of various silos, see the History page for launch, acquisition, death, and zombification years/dates. See site-deaths for upcoming and past silo deaths in particular. These silos are both popular, and used by a number of indiewebcamp community members (often via POSSE) to stay in touch with their friends.

If you have friends that are active on a popular silo, feel free to add it to this list.

Add any silo to this list that you're an active user of and especially if you can document how to export data from it.

A few silos have given users tremendous flexibility in the look and feel of their experience and the content they post.

Historically (but no longer)

Silos have innovated UX since 2003 far more than the blogging/RSS/Atom "communities" (as much as there was such a thing).

Here are some examples of UX innovations that silos either created, popularized, or refined to be much more usable, in rough temporal order.

Despite silos typically exerting tight control over their look, feel, and overall user experience, users have found ways of innovating inside silos, which silos have often adopted and integrated into their UX.

See why for more common issues with silos in contrast to having your own website.

Many silos wrap any links posted on them with their own domains or link-wrapping domains, sometimes in an attempt to make links shorter, sometimes to provide a bottleneck which they can use to mass disable spam/phishing links.

Another good reason to use your own tools (if it's faster than expected, you feel accomplished, not distrusting), or at least re-use indieweb software etc. that others are selfdogfooding because you know they won't be (or there's at least less chance of them) deliberately slowing it down.

While it seems like platforms today are more interested in investing in the users responsible for their success via grants and creators programs aplenty, the reality is that the platform still dictates the terms. They’re not only the point of access to your audience; they’re also the ones deciding what metrics to use, and what counts as a success—and all of that is subject to change over any given quarter

On Instagram, the idea that accounts should make use of all the features the platform promotes in order to be successful lies somewhere between an open secret and industry-accepted theory. (This is at least partly why your chef influencer friend keeps posting Reels…)

If you create content on someone else’s platform, they can force you to make your content using a certain style or method by ranking you based on their own performance metrics.

A number of individuals, prominent and otherwise, have publicly "quit" various silos

From time to time, silo projects are announced without shipping, and often never ship. As this list grows we can consider creating a separate vaporware-silos page.