Ello is microblogging silo similar to Twitter or Tumblr for posting short status update notes and pictures. Ello offers threaded commenting and a minimalist "designy" feel to it with some unusual (but nice) UX animations & interface ideas. As of Sep. 2014 Ello is currently invite-only.

Ello provides the following features as observed from others use thereof: 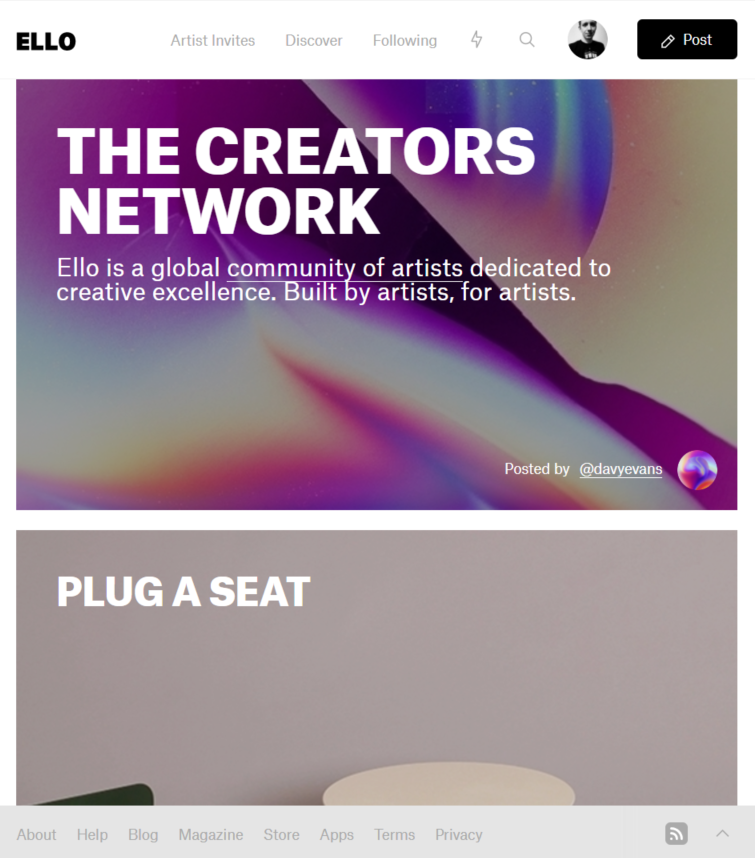 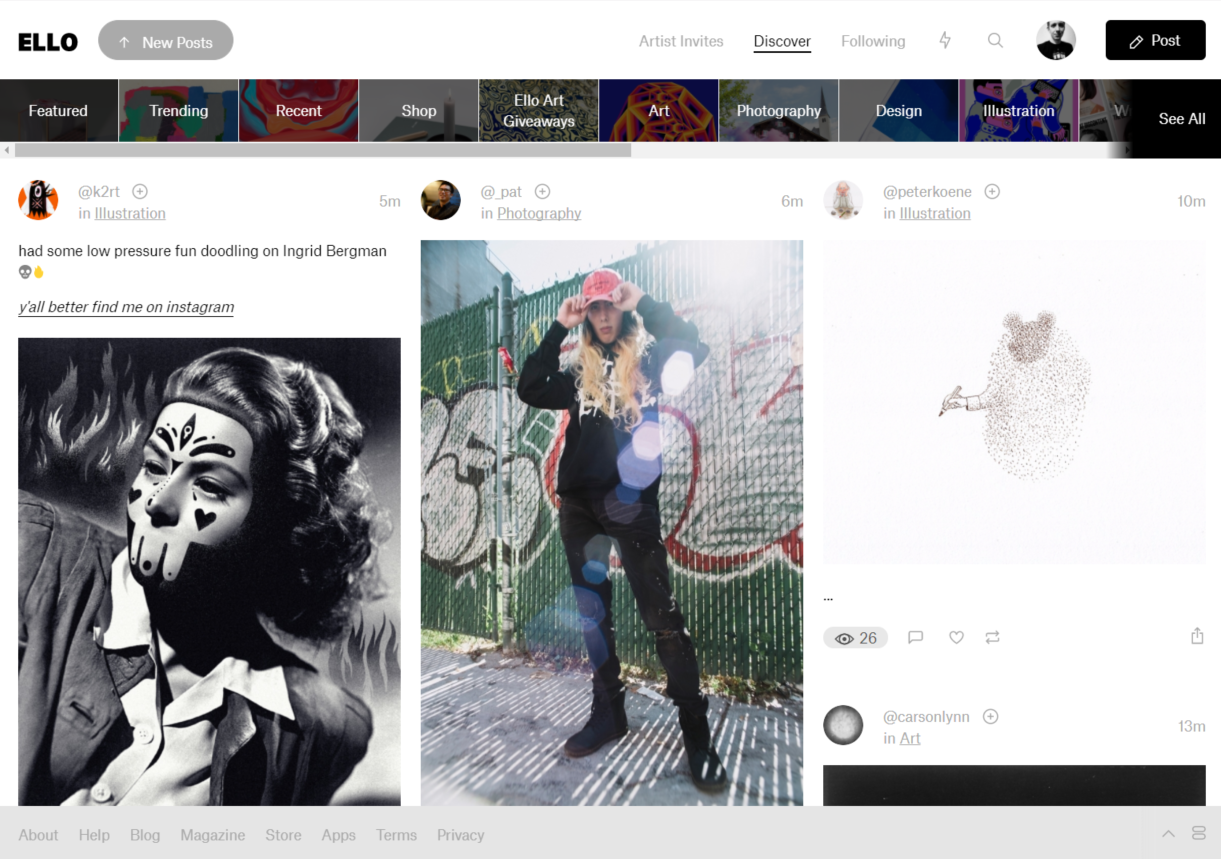 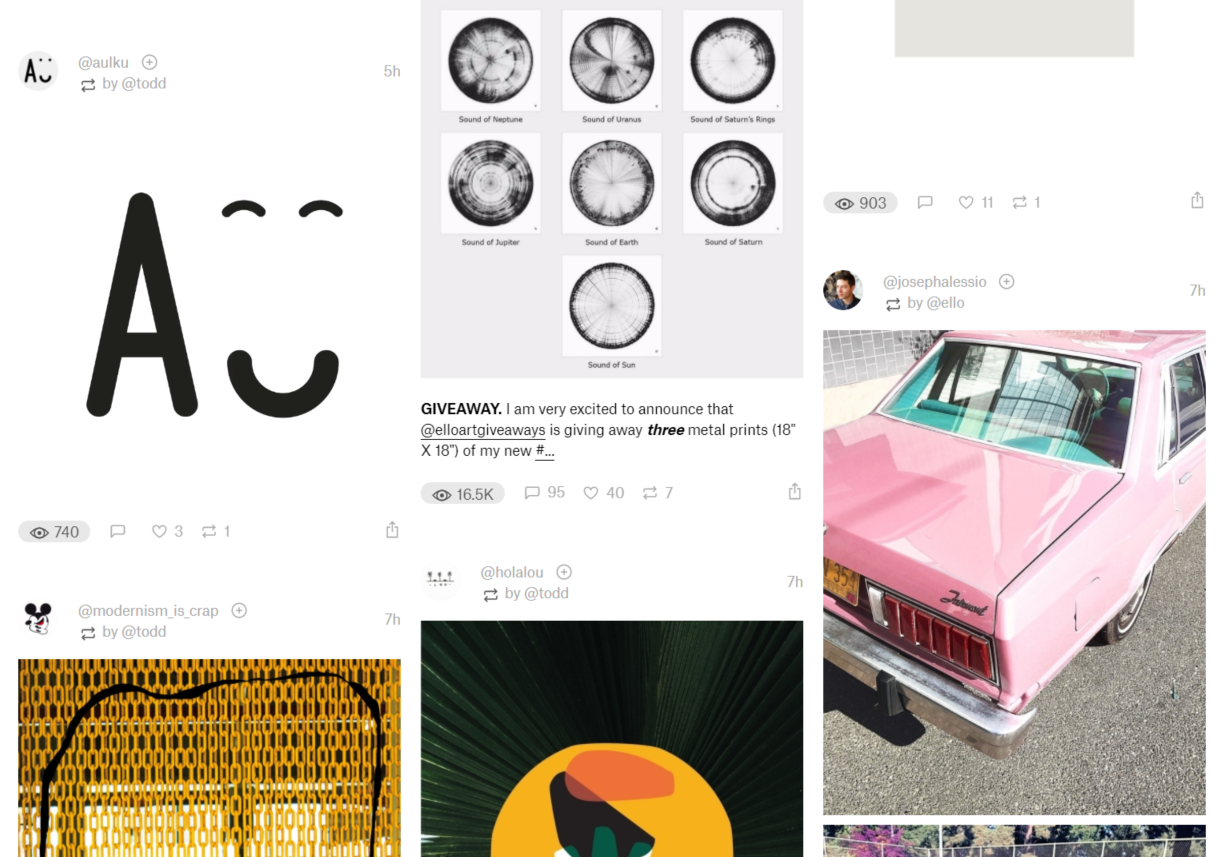 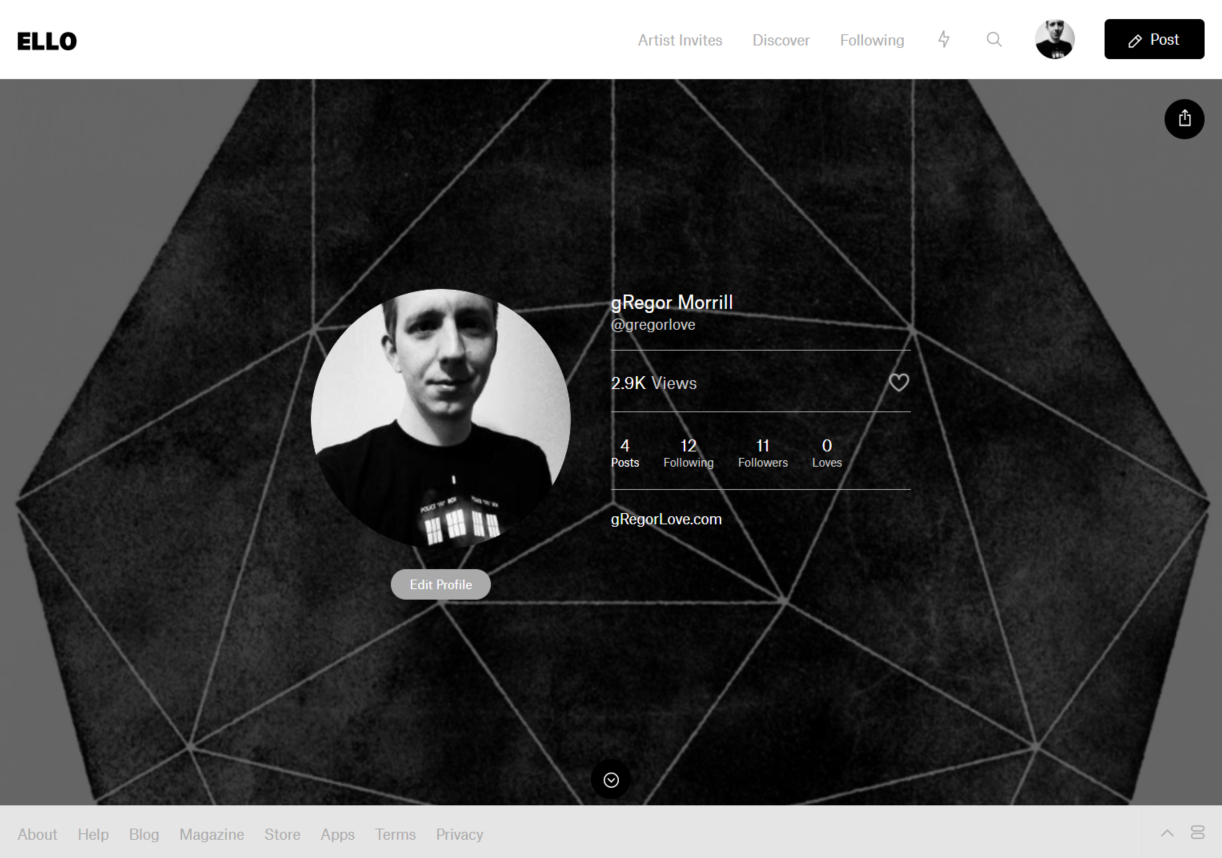 Scrolling down below the hero image shows your posts 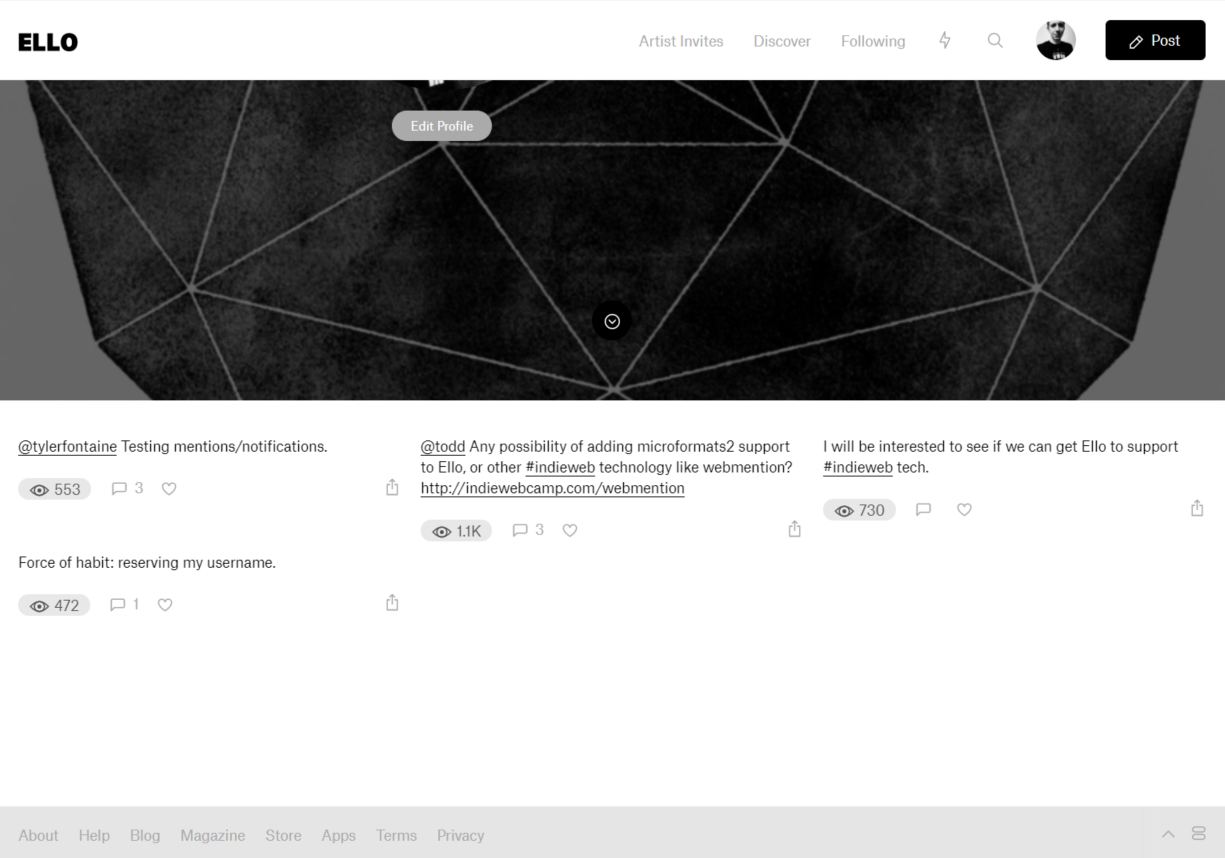 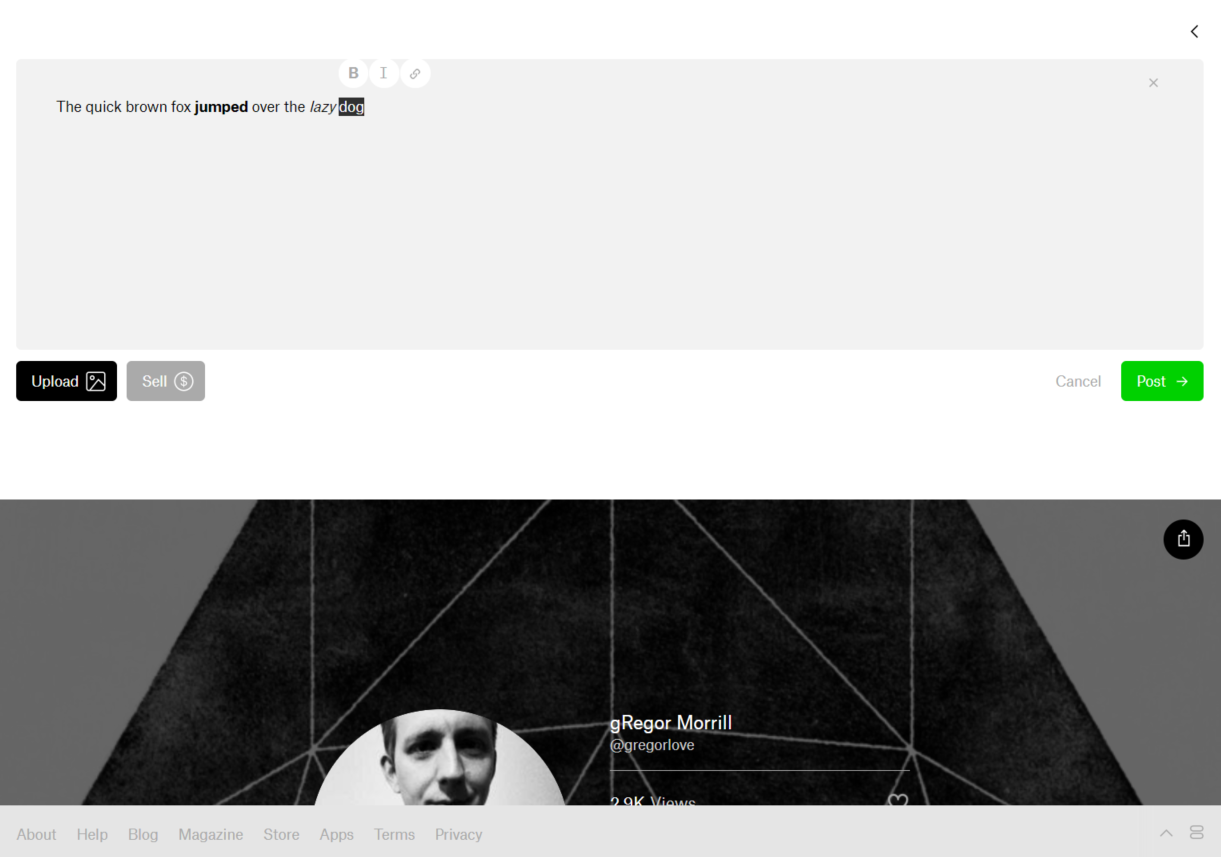 gRegor Morrill inquired about adding microformats2 support or other indieweb technology like webmention. A developer responded that he was not personally familiar with them, but would give it a look. [1]

Ello has not announced an official API yet, but it appears there is one. Unofficial documentation: https://gist.github.com/conatus/cc665f917d5558c123bc

There doesn't appear to be a way to automatically POSSE to Ello.

Jon Pincus has manually POSSE'd a reply from his site (running Known) to Ello:

If you initially create a status update on Known, you can add the ello link by clicking on *Reply to a site*. If instead you create a post (in which the headline will be used for the tweet) you'll need to edit your known post to include the link to ello. Here's an example; I put this HTML is at the top of the reply

The following accounts are interesting for their content, commentary, or authorship:

The following praiseworthy design aspects of Ello are worth noting and further analysis / reverse engineering for indieweb designs.

Fairly Effective Use of Whitespace

Once past the landing page, Ello opts for a completely blank, white canvas upon which their users' content is placed. Individual posts are set off from other posts and page content only by effective use of whitespace, rather than background-colors, lines, or flashy ui.

View https://ello.co/thomashawk zoomed out on a cinema display and see how well the photos scale. Though they could perhaps even do better going full bleed with the images. Thomas blogged about this on his own site:

It appears that Ello is run on Heroku. This was discovered by accidentally opening http://ello.co. (note the trailing period) and seeing a "Heroku: No such app" error message.

See criticism on this theme written up by Andy Baio on Ello itself:

No permalinks for comments

There's no way to link to a comment, e.g. Jon Pincus's first comment here https://ello.co/cshirky/post/a99yZmd6ZPMwM5Yatk0rRQ which he manually POSSE'd from his own site: http://stream.tapestrymaker.net/2014/cshirky-good-points-is-it-possible-to-provide-flow-when

There's apparently no way to enter your own personal site into your profile and have ello link back to it with rel-me. [4]

Ello seems to add extra things in the history and makes the browser navigation buttons act strangely, at least in Firefox. 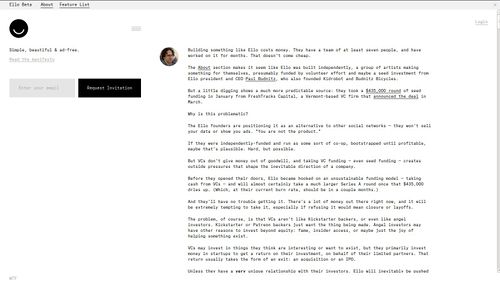 On 2014-10-03 I noticed the main Ello interface seemed to stop working. Clicking a note permalink or comments icon did nothing. When I tried to view the profile directly, this error message was displayed. The errors did not appear to persist for more than 30 seconds, though. —

Ello is a simple, beautiful, and ad-free social network created by a small group of artists and designers. We originally built Ello as a private social network. Over time, so many people wanted to join Ello that we built a public version of Ello for everyone to use. About