mute is the ability to hide posts in your reader that have specific words, or from particular publishers, sometimes only a specific type or format, optionally with an automatic expiration, after which newer posts are visible again.

Some silos have a "mute" feature for hiding posts from people so you don't have to see what they post, without having to unfollow them.

Some silos also have the ability to mute whole words or phrases, independent of publisher, with an optional expiration, after which you start seeing new posts with those words again. 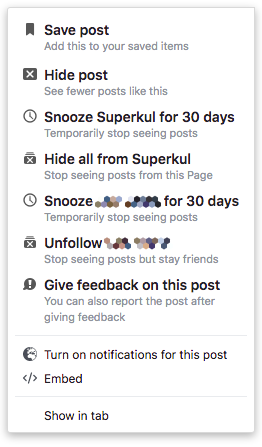 Some form of muting has reportedly been available since 2010(?).

On the iOS app when viewing someone’s profile that you’re following, you can:

On the iOS app when viewing someone’s profile that you’re following, you can:

Gobo is a reader/aggregator that works with Twitter, Facebook, and Mastodon that provides a wide variety of filters within its reader interface that allow users to control, filter, or mute on various criteria including: seriousness, rudeness, brands, coronavirus, gender, obscurity, 2020 US election news.

Kyle Mahan was a an open source tool and service for temporarily muting someone on Twitter. It lived at quiettime.xyz.

Flaminga was (site went down ~2014-12) an in-development Twitter client that proposed some elegant solutions to spam and abuse on Twitter.

Mute seems like a much more user-friendly way to provide control to readers of sites over what kinds of content they see from that site in their readers, as compared to having to either choose from or change their minds about which feeds of a site to follow / subscribe to.

Use-case: you want to subscribe to / follow someone’s personal site updates, but there’s either too much there (they post too often), or you’re uninterested in some of their updates in particular, and want a way to only get the updates you want.

A few current sites have different feed files with different subsets of their content for following / subscribing. While this seems like a reasonable solution, it puts a lot of burden on the publisher to both maintain multiple feed files, and have to deliberately consider when they're publishing, which feed files any particular post will be sent to.

Contrary to the "multiple feeds approach", silos (see #Silo_Examples above) have opted for extending the general UI notion of "muting" all of someone’s posts to the ability to "mute" only some of someone’s posts.

Thus using "mute" to solve this use-case instead of multiple feeds seems like a reasonable approach for IndieWeb solutions as well (especially in social readers which have a UI very much like social media for reading feeds/streams, that have mute features).