or if you have something selected or some other present content context, a

devoid of any actual meaning. In this regard, "share" is merely a social web bulshytt term.

The ShareThis site and button may have been the beginning of the dilution / meaninglessness of "share". Simply try the button on their own site, look at the options, and it covers all kinds of things far beyond the original Facebook "share" meaning:

Install nearly any app on Android and it will add itself to the "Share" menu no matter what its primary action is. Whether saving, sending, publishing, every app now claims to "Share". Screenshots of particularly abusive/diluted/expanded "Share" menus on Android would be helpful.

Appropriate (as per definition to tell others)

iOS6 and earlier used an "outgoing tray with arrow" icon 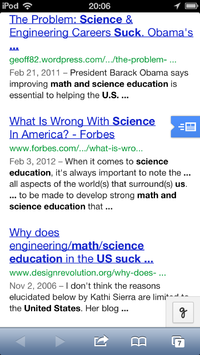 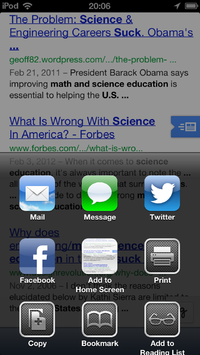 This is consistent with the way I plan on using it because it serves my purposes well:

I am not presenting a share button on my site. Just telling my readers that I've shared something with them. Almost everything on this page is about the share button/action.

I've been thinking about why the Android share features doesn't bother me and I think it's because in my mind it's interpreted like this:

With that framing all of these make sense:

Kevin Marks: I see it on Android as a quicker version of copy; switch applications; paste, except that there is a possible variation based on what is selected in source. On iOS these operations tend to be much more annoying in practice, as the share equivalent there only has a few hard-coded options.