From IndieWeb
(Redirected from friend)
Jump to: navigation, search

friending (AKA add friend or the verb to friend) is a general term applied to the various silo user interactions with sites regarding reciprocal friendship. E.g.:

Jacky Alciné (7 Mar 2019): Twitter doesn't have a concept of friends, everyone is subscribed to one another's feeds; that's all. 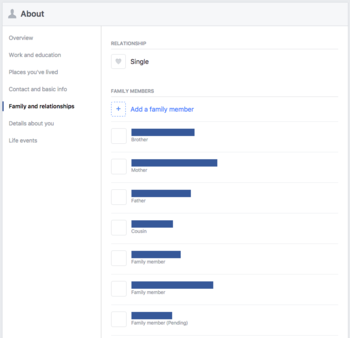 Example of the Family & Relationships configuration page on Facebook.

When a friend request is sent on Facebook, the recipient will have to accept it to create a two-way connection. Connections can optionally have family relationship data attached to them.

Facebook will automatically have two people who became friends follow each other. This is a separate thing and does not have to be reciprocal/mutual. Either person can go and manually unfollow the other again without losing their friendship status. Even if both unfollow the other this has no repercussions.

Being friends means Facebook Messenger can be used without having to whitelist the other person and other communications such as invitations for events become more streamlined.

On the posting side the per-post audience can be tweaked based on friendship status. In addition, friends can be sorted into lists to make this filtering even easier. Facebook will attempt to fill some lists automatically, like those based on family status, location and employer: 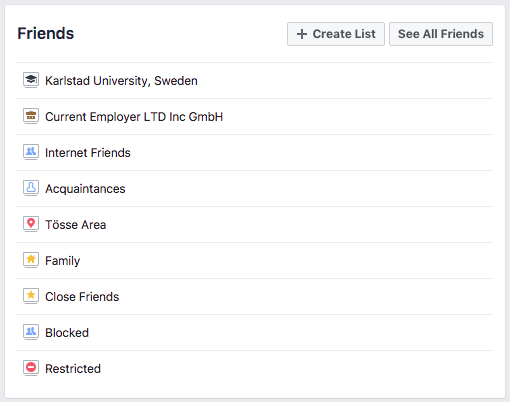 Facebook also by default allows two friends to write on each others's walls.

While related, simply listing or publishing a list of friends/contacts is not really "friending", as there isn't any kind of active UI / action that the user takes. It's more just another form of publishing. Examples / technology for friends lists: