This is just my personal experience how to get my tumblr to be indieweb friendly. There are several different ways to do this, or how to approach your indieweb presence in general. This page is work-in-progress.

This is written for people using Tumblr that are new to indieweb, with a non-technical background, trying to understand what this does for them before deciding to do anything.

This assumes you will stay with Tumblr and want to enhance / augment your tumblr with indieweb features like webmentions and receive commentary from outside parties, as an intermediate, transitional step. Owning your own data and hosting your independent site should be your final goal nonetheless. Read the main wiki page on Tumblr for all the different ways of integrating Tumblr with the indieweb.

So whats all the buzz about? Well I really like Tumblr, since its kinda nice to have this service that allows you to follow people and still be able to kinda maintain your own website. The 'web view' of my tumblr (http://belp.audio or http://belporama.tumblr.com) was always quite important to me, since I wanted non-Tumblr people to see my stuff, I'm a musician and just like to get my stuff out there.

I've seen the options within Tumblr where other platforms like Instagram are connected with Tumblr. But those are like one-off connections, in the end people do not automatically syndicate into other systems but rather copy'n'paste the content, mainly because of formating reasons or for having control over how its published / presented. So then it becomes like a bit messy, you end up doing all this manual work of copy'n'pasting and over time it becomes boring and then either you just stick with Tumblr itself or move to another platform, manually cross-posting is kinda annoying really.

Still you want to like reach people and communicate, especially outside of Tumblr since Tumblr really isn't the biggest community after all.

This is where indieweb came in for me.

One thing you need to get your head around is, that indieweb is not just another Social Media platform (or silo as they say here), but the Web itself enhanced by social media features like reposting, liking, commenting, etc. in general.

With Tumblr you might have had the experience too that you were just looking something up on the web (like I do mostly in the music / entertainment / arts field), and you come across a website and then suddenly the Tumblr controls pop up in the top right and you go like 'Hey cool, this is a tumblr, I can just follow it and see it in my dashboard, etc.'.

Thats basically how indieweb is meant to be. Its about individuality and independent websites regardless of design / layout / style or hosting service or connected into some social media platform, but there is this shared community context and you can easily interact with all these things.

Tumblr / Indieweb is still a bit messy and you need to rely on Proxies like Disqus to get things to work, but it does work, and now I am able to just simply drop the link address of a page that is indieweb-enabled in my tumblr's Rich Text Editor on my dashboard like 'Hey look I found this cool thing here: (link)' and the person running this page then gets automatically notified that I have mentioned him, similarly to how inside tumblr you see this when someone likes your stuff or reposts it or so, but this works across from inside Tumblr to the open web and back again, the person running can then respond and comment on my tumblr post (without being logged into Tumblr), and on my web view of my tumblr post everyone can see this comment. This kind of 'outside feedback' does not (yet) show up then in my internal Tumblr notifications but thru the Disqus proxy I get notified by email 'So and so commented / liked / etc. your post' with a link. 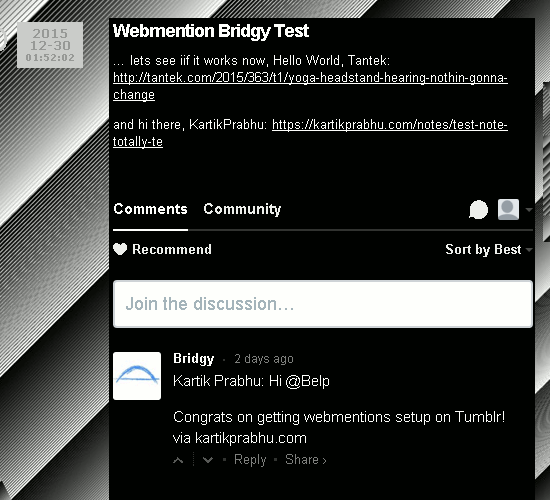 Screenshot of my tumblr post therefore showing up as a mention on an indieweb enabled site: 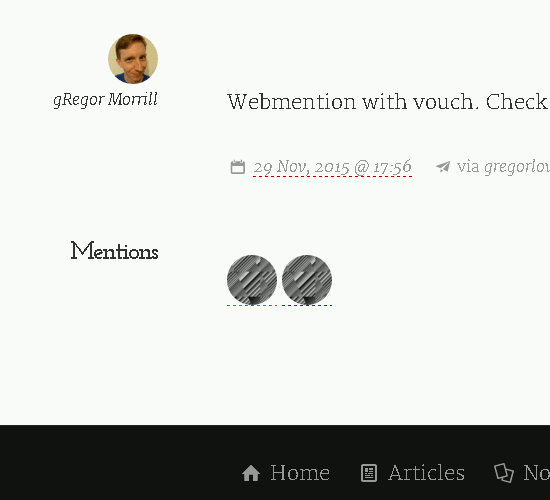 I've mentioned this page in two different tumblr posts, thats why you see my Tumblr avator logo twice. If you click on one them you get to my individual posts mentioning this page.

How do I know a page will receive my notification?

Thats a good question, and I'm currently myself trying to find this out ;). The interesting thing with indieweb is, that all the different technologies, features and tools are implemented differently by everyone. The above screenshot shows a webmention that was implemented by the person running that website in this way shown, another site may use a different representation, or not show it to the open web, or may not even implement this.

With classic social media or silos you can expect every user to share the exact same functionality, so you can expect and rely on things showing up or behaving as you expect it. With indieweb you simply don't know who uses what and how. Indieweb is still small as compared to other established social media systems but its growing fast and maybe a set of best practices / common usages will crystalize over time.

However, Bridgy, the indieweb tool that relays communication between my Tumblr and indieweb does give some indication what has been successfully sent and received: https://brid.gy/tumblr/belp.audio

I want this too!

Great. It took me a little while to get it to work, but basically all the information is available in this Wiki and folks on the IRC channel are superfriendly trying to help you. Go for it!

Can't I just use your Tumblr Template to get Indieweb?

Yes and No. It is important to understand certain indieweb building blocks like IndieAuth before you can for example use Bridgy for webmentions. Also, a disqus account is required. But if its of any help, I've dumped my template here and stripped out all my personal data / settings. I got some indieweb features to work with this but note that its still far from being a general Tumblr template for indieweb. Be aware that I just took the one from Tantek and modified it.