Almost any type of data entry on the web could potentially be vulnerable to spammy content. Typically the most vulnerable are unprotected comments forms and endpoints consistent across domains due to monoculture.

As Webmention + h-entry replies/comments/likes/reposts/RSVPs adoption grows, the probability the spammers will adopt it also grows.

It behooves us, the indieweb, to be pre-emptively thinking about how to fight spam.

If you accept webmentions and alter your display in any way (showing cross-site comments, likes, reposts, RSVPs), then you are potentially vulnerable to being spammed.

We have a proposal for preventing Webmention spam:

Take a look at the Vouch extension to Webmention, try implementing it, interoperating with existing implementations, and report your experience.

WordPress is both a huge target and tool for spammers. The more popular WordPress has become, the more they've targeted it. By analyzing spammers tactics (and weaknesses) against WordPress, we may find clues that help us block them from the indieweb.

Akismet, Automattic's flagship spam filtering service, is very popular with self-hosted WordPress users and enabled by default on WordPress.com blogs. The team publishes statistics on their blog every month. They're pretty thin - just global spam vs ham counts per day - but still interesting. Ham generally comprises just 1-5% of all comments.

Anecdotally, during the month of November 2014, https://snarfed.org/ received 796,990 POSTs to its comment form, wp-comments-post.php, vs just 2139 POSTs to xmlrpc.php. Of those, 9 comments and 3 trackbacks were ham.

Pingback and trackback are well-known WordPress spam vectors, so much so that Akismet is about to shut off (or has already?) pingbacks. As cited above:

These days almost 100% of Trackbacks and Pingbacks are spam.

WordPress introduced a WordPress-only feature called "WordPress Like" which is essentially their version of the Facebook "Like" button. Spammers create WordPress.com spam blogs and then "Like" other WordPress blogs in order to get links to their spam blogs. As such, WordPress users complain of most of their likes being "fake" or from spammers only.

Such likespam is a frequent occurrence on various silos as well, where spam account like various posts in order to get the authors to see who liked their posts, show them a spam message on their profile, and perhaps even get them to click a spam link in their profile. Instances of likespam are readily findable on:

In both cases, even if you block the spam account, their "like" on your silo post remains. Though hidden from you (since you blocked them), viewers of your posts still see the spamlikes, and are thus still exposed to following them to see spam messages or links to spam sites in their profiles.

This failure to remove spamlikes of blocked accounts from posts is sufficient reason to go silo-private, since posts on silo private account can only be "liked" by those you explicitly give permission to, thus preventing all likespam on such accounts.

Silo likespam is particularly bad for the indieweb when you automatically backfeed (e.g. using Bridgy) from your silo POSSE copies, and thus end up linking to the likespammers from your own site!

As noted in the onecoolsitebloggingtips post, spam blogs have several weaknesses:

This implies that if we require rel-me symmetry link checks on any Twitter/Facebook/WordPress.com (and other?) sites that someone links to, we can filter out some of the spam.

In the case of Twitter, people try to use protected mode to prevent unsolicited access to their posts. This can lead into a situation where a fleet of accounts can flood someone's follower request stream.

There are a great many techniques that can be utilized to prevent spam.

Note: The following is a brainstorm, does not reflect current implementations and probably needs work --Waterpigs.co.uk 16:21, 22 May 2013 (PDT)

Typically I consider allowlists to be a negative thing for accepting general commentary — it seems elitist and similar to search bubbling (i.e. trapped in a bubble). However, allowlists are the most straightforward and probably most effective prevention measures.

So, a more flexible allowlist-based approach might be implemented as follows:

Posting a note mentioning someone:

In a turnabout of sorts, we can use existing silo connections as a potential spam filter as well.

Here's you could use Twitter's social graph as a dynamic second degree allowlist:

When your site A receives a comment from an indieweb site B:

Perhaps break these into separate sections if you're considering pursuing them:

While an expiring token in the endpoint may help mitigate DDOS, based on recent experience it seems ineffective for preventing (or even minimizing?) spam.[5] [6]

Webmentions could implement a DKIM solution as e-mail has, as in: public keys in DNS record; messages have signed by private key additional headers. The issues are: complexity ( both in setup and in implementation ); dependency on the DNS system which is not always trivial; if it's optional only, it would not make enough difference.

This might be the first native webmention spam seen in the wild, 2018-01-29. Source, target, discussion.

It's unclear whether it's true spam, or whether the sender was just testing their webmention sending on an unrelated target. The target was an article about testing webmentions, and the sender sent another similar webmention on 2019-06-18 (source), which makes it seem more like testing than spam.

dobrado supports both blocklisting and allowlisting by domain, of webmention comments and notifications since July 2016.

In some cases it may be difficult to prevent spam, and thus the next best thing is to detect it quickly and delete it after the fact.

A web service which, given a source and a target, returns a simple spam/ham/requires-moderation response.

Possible other option: webmention proxy. You use anti-spam.com or whatever as your webmention endpoint, which forwards non-spam webmentions to your real endpoint, perhaps with some extra parameter indicating if it needs moderation. Requests would be signed, making it easy to determine that they are in fact from anti-spam

Apparently iMessage is now being spammed, by spammers registering hotmail.com addresses as AppleIDs: 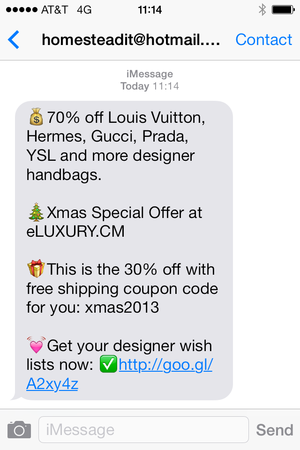 IndieWebCamp sessions related to spam and webmentions in particular