See also: webmention, the plumbing used to notify posts that they’ve been linked to

A mention is not really a “type” of post from the publisher’s perspective (i.e. there is no “mention” UI), as any sort of post which can link can implicitly be a mention, as well as potentially being in response to another post.

For example, this post is an explicit reply to this post, and at the same time an implicit mention of this URL.

Mentions typically don’t fit into comment/reply threads and therefore are often displayed separately, or in a more compact manner.

Unlike a like, a mention is not implicitly emotionally positive — a link is not always an endorsement.

Aaron displays mentions to posts on aaronparecki.com in an “other mentions” section below likes, reposts and comments, as well as giving the mention count in feed views (example).

Barnaby displays mentions to posts on waterpigs.co.uk inline chronologically with other responses, but in a more compact form that explicit comments, and displays mention counts in feed views (example). 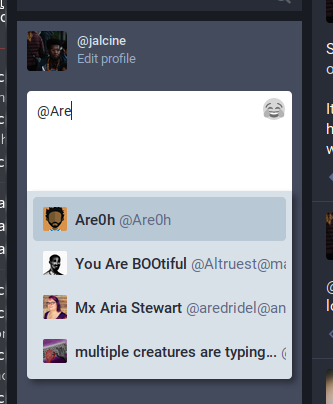 A webmention get sent when you link to another website. A reply is a specific post that requires markup on the link to indicate that someone is publishing a reply rather than a generic mention.

A key difference is the overall goal of the post. If the purpose of al the content is to reply to content somewhere else on the web then use reply.