The Apple iPod is a portable music player that comes in many forms, including the iPod Touch which runs iOS, iOS applications, and can be used as a mobile communicator and web browsing device.

The battery life typically lasts longer than an iPhone.

How to best use an iPod Touch, specifically to avoid or minimize "data capture" that is subsequently difficult (if not impossible) to export.

How to export your data from an iPod, especially if its wifi is broken.

... this really needs much more documentation - see real world example of this problem in #Broken_Wifi below ...

It is possible for an iPod 5 Touch running in iOS9.2(.1) to somehow get into a state where its Wifi is neither on nor off, and you cannot change it either.[1]

This is indicated with a dark grey circle on the swipe-up preferences where the Wifi status/button would normally be, and in a greyed out toggle switch in Settings: 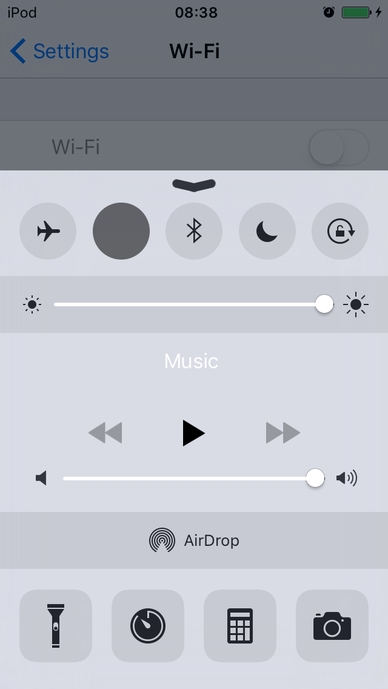 Normally iOS devices like iPod Touches can updated themselves over wifi, but if for some reason you can't (e.g. Broken Wifi above), you can update your iOS software from iTunes, over USB/Lightning.

As part of the iTunes iOS software update process, you may see one of the rare MacOS auto-dimiss alerts: