Marginalia are responses to parts of a post, rather than posts as a whole; they are typically published (on another site) with a fragmention link to the specific part (like a paragraph), notified via Webmention, and displayed on the post adjacent to the referenced part (like sidebar comments next to paragraphs).

On the IndieWeb, marginalia can be posted with the same process as a usual post-level interaction, but with the target URL of the interaction set to a fragmention of the relevant phrase. For instance, to post a reply to a phrase "Gregor Samsa woke from troubled dreams" on http://example.com/kafka set the the in-reply-to URL as http://example.com/kafka##Gregor+Samsa+woke+from+troubled+dreams.

Notifications of marginalia posted by readers on their own site can be received using Webmention sent to a URL containing a fragmention.

As a first step, marginalia can be displayed as normal post-level comments at the bottom of the post but with a reference/fragmentioned link to the context-phrase.

A better UI is to display received marginalia in context, near the phrase being referred to. Marginalia UI could be coarse-grained to group all marginalia to a particular paragraph together or displayed at a phrase-level. To avoid interrupting the reading flow, some UI to hide/show the relevant marginalia could be provided.

Kartik Prabhu posts and displays received marginalia on https://kartikprabhu.com since 2014-07-10 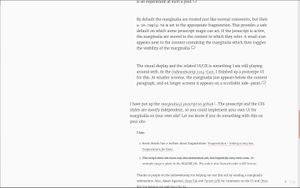 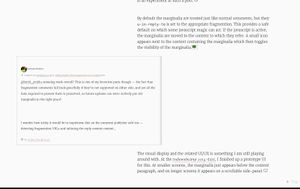 Medium supports paragraph-level comments through a Twitter login. (Screenshots of the article [1] as on 2014-04-16) Posting a comment is triggered by clicking on a "+" sign on the top-right corner of a paragraph.

Similarly, you can read the comments by clicking on the number on the top-right corner. On large screens the annotations appear in a sidebar on the right.

For medium-sized screens the main text slides out of the screen to the left, making room for the sidebar. 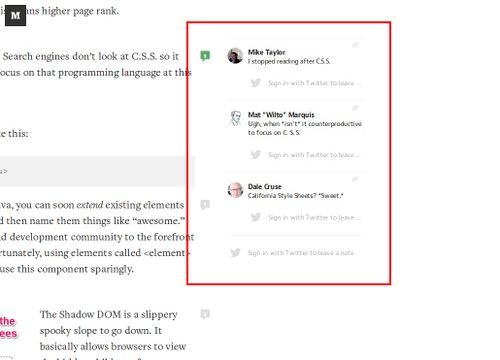 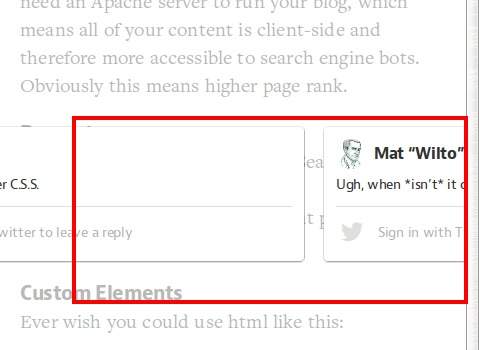 On mobile Firefox the overlay additionally includes highlighting on the original content, but breaks on swiping to read next comment. 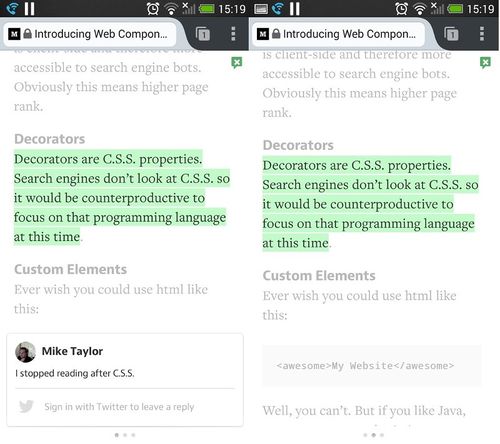 Expand: on text selection, Medium shows a "Tweet this sentence" interface. Could be adapted for posting marginalia.