From IndieWeb
(Redirected from sponsors)
Jump to: navigation, search 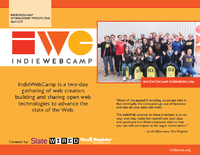 Become a monthly supporter at

or see below for options to sponsor an individual event

IndieWebCamp is a two-day gathering of web creators building and sharing open web technologies to advance the state of the Web. The first day is about discussing how to empower people to own their identities and data, followed by a day of hacking & creating. IndieWebCamp first started as a small event in Portland, Oregon and has since grown to 5+ main events per year in the US and Europe, as well as biweekly events in 5+ cities worldwide. IndieWebCamp is maintained by volunteers around the world, and all conferences are run by the community.

"What happens if Yahoo freezes your online account, loses your data, or goes out of business? What happens if you decide to move all your Facebook photos to another site? What if you want to reply to someone on Twitter using Google+? And the [IndieWeb] builds software that answers these questions." - Klint Finley, Wired

IndieWebCamp events routinely attract core developers and designers from Facebook, Google, Mozilla, Esri, and W3C contributors to HTML & CSS, as well as prominent journalists and writers looking for the next generation of publishing on the web. The indieweb.org wiki gets over 25K views a month, and the community chat room regularly has 100+ people and is steadily rising. IndieWebCamp events have been covered by Wired, Slate, and other major news publications. Each event is kept small for quality and collaboration purposes. Expect 20-50 people per IndieWebCamp event, and 10-20 at each bi-weekly event.

"[Participants at IndieWebCamp practice] classic Internet innovation: created and deployed at the edge, not the center; rough, and constantly being improved."

"In their early work they're taking advantage of the good things the social network 'silos,' as they call them, can offer, while ensuring that the data we create, and much of the conversation it engenders, lives in our own home-base sites."

"And if we're lucky, and help these folks by testing it out on our own devices, it's a vital part of the future." - Dan Gillmor, Slate.com

"Much of the appeal in avoiding corporate silos is that eventually the companies go out of business and take all your data with them. The IndieWeb solution to these problems is to run your own site, retain full control over your data and syndicate it to those corporate sites so that you can still participate in the larger conversation." - Scott Gilbertson, theregister.co.uk

Portland is the location of the annual IndieWeb Summit, the original IndieWebCamp event. 50-60 attendees including leaders from Mozilla, Google, Esri, OAuth, CSS and HTML W3C Committees and other major companies and contributors to the web.

IndieWebCamp events in Portland have been hosted at

The first IndieWebCamp event in Germany was hosted at Agora Collective in Neukölln, Berlin. The event attracted mixture of developers, artists, and technology oriented community activists who care about privacy and data ownership! IndieWebCamp events have also been held regularly in Düsseldorf and Nürnberg.

IndieWebCamp San Francisco attracts core contributors to CSS and HTML W3C Committees, people from Google, Facebook, Mozilla, Esri, and other influential organizations, as well as emerging startups and Stanford alumni. It is a small event located in the middle of the city. Approximately 20 participants with some remote attendees.

IndieWebCamp NYC has been hosted at the New York Times office, and the Mozilla Manhattan office.

The 2014 event was held simultaneously with Portland. The 2016 event was held in January and attracted dedicated participants despite being the weekend of the Great Blizzard of 2016!

The Brighton event is held annually. In 2014 it was held along-side the dConstruct conference. The event attracts top designers and developers, especially in the field of next generation user experience design. Approximately 30 participants from all over Europe and the US with some remote attendees.

The Cambridge event attracts theorists, journalists, and technologists from MIT and Harvard working in the Media Lab and writing policy on privacy and the future of the web. Approximately 20 participants with some remote attendees.

IndieWebCamp Cambridge is hosted at MIT.

We love working with sponsors who are aligned with and supportive of our principles.

Please note that sponsors are expected to follow our code of conduct just like any other participant of the community.

Offer to host an IndieWebCamp event in your space.

At this level, you will be sponsoring a full year of IndieWebCamp events in multiple cities and timezones. You will get:

Sponsorship of any amount is appreciated! We also welcome alternative sponsorship suggestions, such as branded lanyards, etc. Please get in touch with the local event organizers to discuss.

Your contribution will be used to fund the ingredients that will make IndieWebCamp a success, including the venue, food and drink, printing costs, giant sticky notes, sketch paper, etc. While there are no formal speaking slots available, anyone from your team is welcome to attend and participate in the events, even if you don't yet have your own domain name.

For sponsorship of individual events, you may contact the local event organizer or contribute on Open Collective as well.