From IndieWeb
(Redirected from ephemeral)
Jump to: navigation, search

Expiring content is content that is only temporarily (ephemerally) relevant, and also part of a larger post, that can and should be (preferably automatically) removed once a particular datetime has passed (the expiration date).

Some URLs to read, extract info from, and expand this article with:

If you're writing a post that has both long term relevance, and bits that only matter in the immediate day or perhaps week afterwards, it makes sense to designate / markup those bits as ephemeral content, and have your site automatically remove them or switch to something else after the fact.

From existing examples, there appears to be two types of ephemeral posts:

The first are similar to the ephemeral content example above.

The second type of ephemeral post, popularized by the Snapchat silo and copied by Instagram stories and others, seems to make it easier to "just post" something without worrying as much about presentation, details, refinements, since there is an expectation that it won't be (publicly) archived/shown/discovered for all time.

Examples of IndieWeb sites/posts with content that would benefit from automatic expiry.

This post: http://tantek.com/2014/308/b2/my-first-year-november-project#half-marathon-hills-track has a couple of pieces of temporal content I would have liked to have expire automatically:

Last.fm allows one to set jam-like posts. Any scrobbled song can be set as a current obsession which will be shown on the user's profile page similar to a pinned post. Current obsessions can be deleted or changed at any time, but are set to automatically expire within a week. 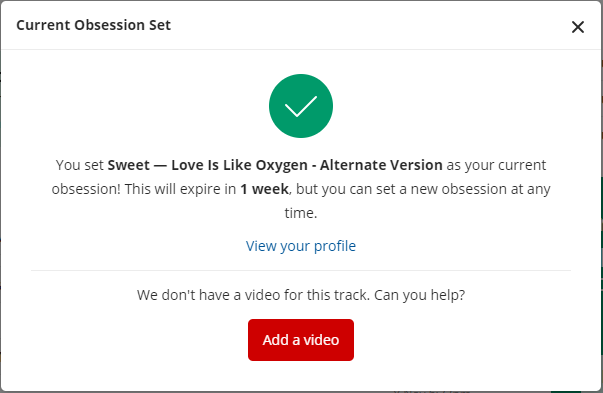 What would be a good way (UX) for the user to select and indicate that some content should be expired when?

What would be a good way to store that certain sections of content should be expired?

What would be a good way(UX) for the user to select and indicate that some content should be replaced by some other content automatically when?