From IndieWeb
(Redirected from indiearchive)
Jump to: navigation, search

IndieArchive is a project to collaboratively grow an archival copy of pages replied to (possibly also mentioned) in indie web posts.

i-a.github.io was started as a possible shared repository of linked-to content. Presently it consists of a spec only, though several sites keep their own archive based on the concept.

Like archive.org, but without dumb/meaningless redundancy, and dates/times compressed with NewBase60 to make the URLs even shorter.

Aaron Parecki kept an archive of external pages (both linked to and for webmentions received) from 2013-09-08 to 2016-01-31. As of 2016, the archive was 1.9gb in size. The archive contained only the HTML of the page, and did not include linked resources (images/css/js) of the external page. The primary purpose of the archive was to be able to parse the microformats in the page to render comments and reply context.

Barnaby Walters is keeping an archive since ????-??-?? of external linked to pages, and has published a php library for maintaining and querying an archive:

The files in this archive should be stored on disk in an easily inspectable manner. However, URLs do not map cleanly to the filesystem. These four URLs are unique web pages but would result in conflicts on a filesystem:

Additionally, we need to be able to store http and https URLs separately, as well as non-standard ports:

As such, we need a simple set of rules to map URLs to filesystem locations, so that we can be sure there are no conflicts when saving on the filesystem.

Given a URL, the location on disk will be:

For example, see below for the resulting paths for the examples above.

Note that without appending ":" to folders, it would be impossible to store all these files on disk since "example.com/tags" would have to be both a file and a folder.

This results in a folder structure that looks like the following (OSX renders ":" as "/") 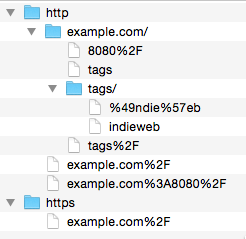 Ideally I'd like to be able to store multiple versions of external files I encounter, for example when someone updates a post, I may want to be able to see the previous version of it so I know what has changed.

To accomplish this, it is easy to extend the above archive scheme to include versioning support by appending a version number to the end of the filename. A human-readable way to handle this it to use the current timestamp to indicate the version. For example:

It is possible to find the latest version of a particular URL by sorting the files that match the base URL path alphabetically and using the last entry.

A conversation between aaronpk and tantek on IRC about link rot and an OSCON 2011 session that was about a WordPress plugin that automatically made personal archives of pages you linked to.[2]

So what would be a good way to make a backup of every page you link to from your site?

We could do it collaboratively for public pages, automatically in our publishing systems of pages we link to.

On the design / usage of IndieArchive - notes from IRC:

Aside: IndieWeb vs. FSW methodologies and coming up with this

The Internet Archive (archive.org) is a logical organization to coordinate with for indiearchiving.

2013-146 Brewster Kahle said to email him re: how can the Internet Archive help with IndieArchive.

Some blue-sky speculation on the idea of "memory" in the web - both for remembering (archiving) as well as forgetting.

A site that notices certain off-site links are frequently clicked could begin archiving the target page locally - it retains a "memory" of the target content, and so that content has a greater chance of remaining over time. Conversely, a site that feel a need to do so, could choose to remove un-clicked links over time - it "forgets" about this portion of the web.