From IndieWeb
(Redirected from Github)
Jump to navigation Jump to search

GitHub is a specialized content hosting silo for code, issues, comments, and static content that has some aspects of a commons, and through free domain mapping, a content hosting service as well.

While git is inherently distributed, all the extra functionality (issues, pull requests, etc.) that GitHub adds on top is not. GitHub has a nice API for interacting with repositories, which makes it pretty easy to POSSE issues, comments on issues, stars, and maybe more.

Plain text notes can be POSSEd to GitHub as a gist.

No known examples of anyone doing this yet.

Be the first and add your permalinks here!

An issue post that is in reply to a particular GitHub repo can (and should) be POSSEd to GitHub as a new issue on that GitHub repo.

A reply to a GitHub repo path, may make sense to be POSSEd as a comment on that path, e.g. if it is a gist. If the reply is an issue, see above POSSE an issue.

A reply to a specific GitHub issue can (and should) be POSSEd as a new comment on that issue.

If the GitHub issue was itself originally posted as an indie issue, then be sure to post your reply as a multi-reply in-reply-to both that the indie issue permalink, and its GitHub copy.

If that previous comment was itself originally posted as an indie reply, then be sure to post your reply as a multi-reply in-reply-to both that previous indie reply permalink, and its GitHub copy. E.g.:

A star on a GitHub repo can (and should) be POSSEd as a like of the repo.

A reacji to a GitHub issue or comment can (and should) be POSSEd as a reaction to that issue/comment on GitHub respectively.

If that GitHub issue or comment was itself originally posted on the indieweb, the be sure to post your reacji as a multi-reply in-reply-to both to the indie issue/reply post permalink and their GitHub copy.

If you POSSE to GitHub in any of the above ways, you should backfeed any replies on your post's GitHub POSSE copy back to your own post so that you can:

Aaron Parecki is automatically POSSEing comments on GitHub issues from his own site to GitHub using silo.pub (as of YYYY-MM-DD), and before that was manually POSSEing. E.g.:

At some point Aaron switched to using silo.pub to POSSE to GitHub

Colin Tedford manually POSSEs Github issues, and manually POSSEs and backfeeds comments on GitHub issues (it's just occasional bug reports, so not as onerous as it might be if he were a developer).

He does this with the Known plugin to POSSE to GitHub.

Tantek Çelik is POSSEing to GitHub using Bridgy Publish since 2018-02-19:

Bridgy can POSSE issues, comments, stars, and emoji reactions to GitHub, as well as backfeed comments and reactions.

If you get an error POSSEing to a particular GitHub repo using Bridgy, you may need to ask the repo's organization's owner(s) to approve Bridgy as an OAuth app for that repo.

See and refer them to: https://help.github.com/articles/approving-oauth-apps-for-your-organization/

Known has a plugin for automatic POSSEing to GitHub:

Porting to the IndieWeb

Example github activity Atom feed whereby you can export or PESOS your activities from:

Some people use Github to gather comments for their blog posts. For each post, an issue is opened. Comments are fetched via the Github API and displayed below the blog post

If you deploy an application that uses GitHub's API and needs to request the user's permission, it will display an OAuth permissions page that looks like *you* (the author of the application) are asking permission. 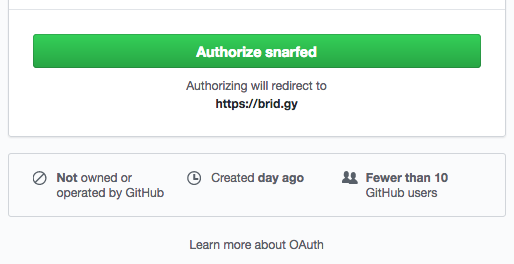 Bridgy for GitHub now does this ("Authorize bridgy" green button), using the https://github.org/bridgy organization. Example prompt below with updated green button. The real prompt has the real logo and omits "local" / "localhost:8080": 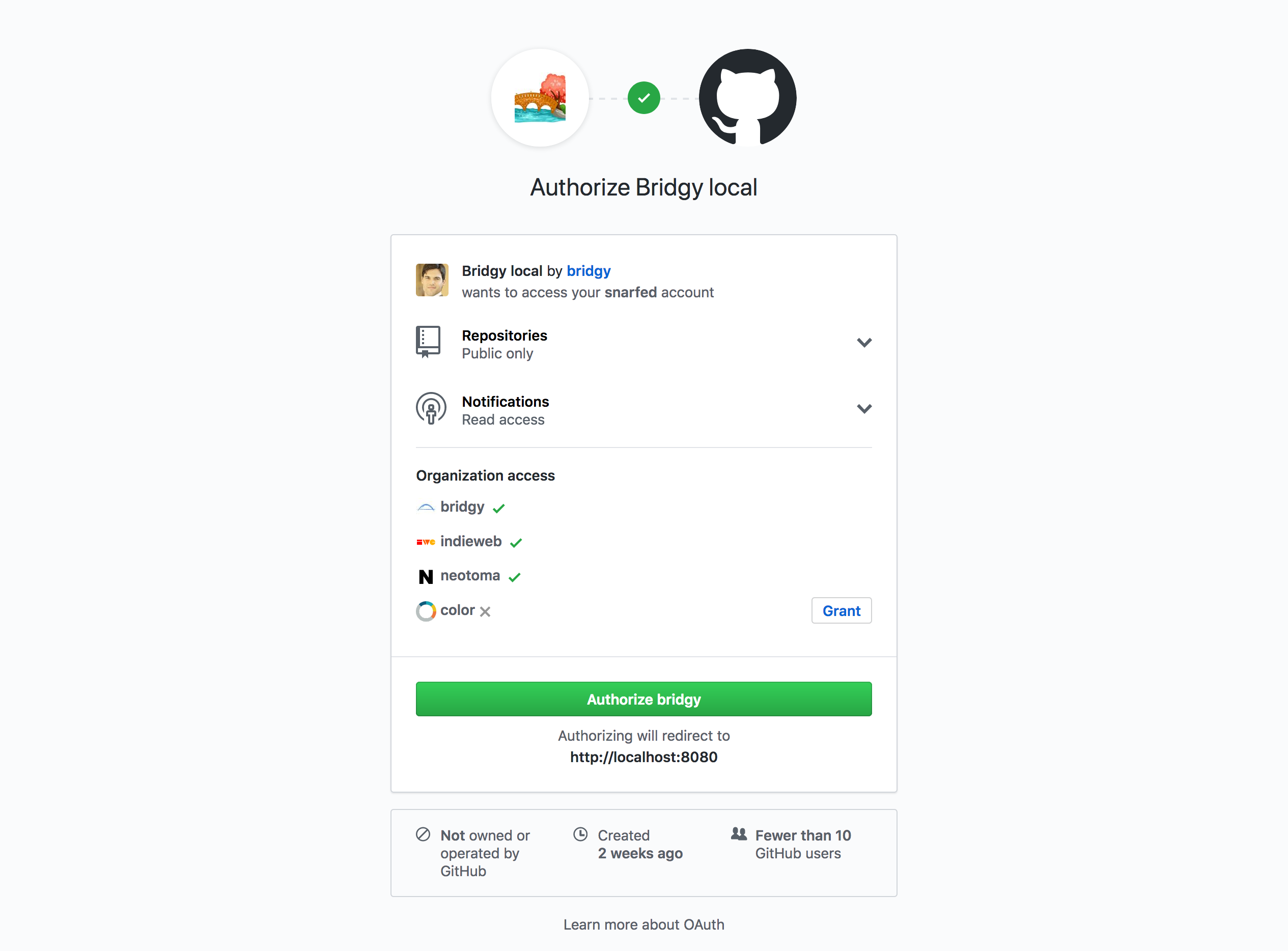 Any attempt to load a GitHub URL (assuming you were previously logged in) would result in a temporary redirect to that interstitial. You could still view public GitHub URLs in a browser's "Private Mode" without seeing the interstitial (because you were not logged in).

Note: DO NOT only use "Fallback SMS number" as an account recovery mechanism, for all the reasons documented on the SMS page (tl;dr, SMS is horribly insecure, and fairly trivial for a professional to attack - has already happened to numerous people.)

There are some self-hosted alternatives to GitHub. Gitlab and Gogs support issue tracking and project management as well.

You can lose your data due to unjustified DMCA takedowns:

Github is sometimes the target of DDoS attacks, apparently targeted at specific projects. While GitHub seems to be handling the attacks in such a way as to keep access working, this is a vulnerability of any centralized service, that it attracts attacks unrelated to your use of it, that jeopardize your use of it (collateral damage). Most recent first

In March 2017, GitHub updated their terms of service. Several people are upset about the change, which may affect GPL and similarly licensed software.

Contract with US Immigration and Customs Enforcement (ICE) 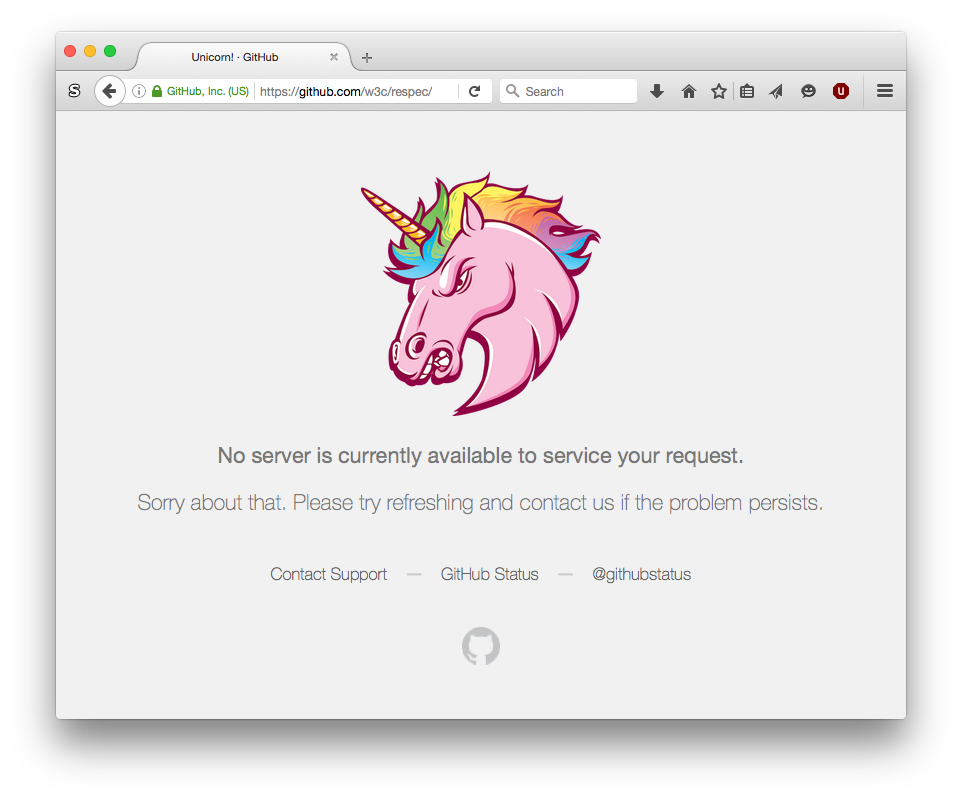 No server is currently available to service your request.

Sorry about that. Please try refreshing and contact us if the problem persists.

During that time GitHub was effectively "down" for many users and use-cases.

GitHub had various outages during the month of March, 2022.