reacji is an emoji reaction, the use of a single emoji character in response to a post, introduced as a feature by Slack[1].

For collections of reacjis and examples see

Why should you support posting reacji posts?

One great reason is to own your reactions(👍👎😆🎉😕❤️🚀👀) to GitHub issues and comments by posting them on your own site and POSSEing (e.g. using Bridgy).

Display a reacji post itself with reply-context. Because a reacji is so minimal, it may appear meaningless or misleading without additional context. But because reacji are small, a normal reply context would be presentationally overwhelming and look awkward.

The reply context for a reacji should be similar to the reply context for a like, which tends to re-order the reply-context as the object of the like, rather than a header above it. At a minimum show the in-reply-to URL linked to itself, then additional information as it is available (e.g. name or summary of post), all of which can be wrapped in a u-in-reply-to h-cite hyperlink. Some sample hypertext designs:

Post a reply (How to markup) where the content is a single emoji character. Thus u-in-reply-to is required.

Note: if there is HTML in the content property, it may mess with emoji detection, so you should use p-content, rather than e-content for reacji reply posts.

Can use div or li or even span instead of (or around) the p element depending on what works for your site and context, e.g. on a permalink or in-stream. Note the reply-context comes after the content which is atypical for reply-context hypertext design/markup in general.

In addition, if your reacji is at least a somewhat positive approval, you may want to add a u-like-of class (in addition to u-in-reply-to) to your link to the original post, so that even if the receiver only supports likes, they can count your response as a like, until they add support for receiving reacji.

(complete h-entry reacji as a positive response code example would be nice here, perhaps with a thumbs-up or heart or smileyface emoji)

Ben Roberts supports individual reacji posts in Postly since 2015-12-16 (his birthday, send him a 🎂)

Month view on Seblog containing a reacji post in the middle of likes, reposts, photos, checkins and an rsvp 'yes'. 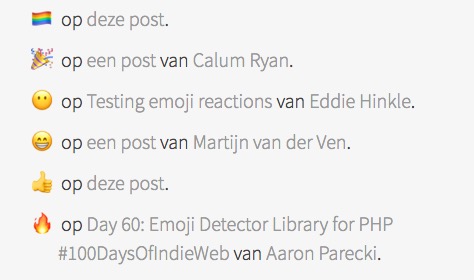 Feed of reacji on Seblog, consisting of six separate reacji posts, in the format: "[emoji] on [post name] by [author name]."

Peter Molnar used to display reacji with Wordpress, then had them removed; now they are back again, but since it's a static site, they are display with significant delays - 2017-06-01

(permalinks needed that show displaying reacji from others)

Twitter seemed ready to roll out official support for 'reacji' but it was never widely released:

Without official support people have been experimenting on their own...

A tweet author can simulate a limited curated set of reacji by posting a survey with only single-emoji responses. E.g.

Tantek Çelik thoughts on reacji reply context design, deployed since brainstorming, have been incorporated into "How to display" above.

(need to reprocess the below to determine if they’re more relevant to individual reacji posts (this page), or displaying received reacjis on a post (reajic):