reacjis are a collection of reacji posts displayed on a web page, usually after an article, reply, or other piece of content on a website. reacjis may be accompanied by a count of reacjis.

The row(s) of buttons with icons at the bottom indicate the reacji that the post has received, with the numbers inside them showing the counts of how many of each reacji has been received.

For individual reacji posts and guidance on how to markup a reacji permalink, see:

Why should you support receiving reacjis and displaying them?

So people can send you reacjis and have it show up!

E.g. a 🎂 for your birthday, or different kinds of reactions instead of just a "like".

How to receive and display reacjis

You can detect a reacji reply post by inspecting any incoming reply to see if it is a single emoji character. This is harder than it seems as there are many possible emoji sets and some emoji can consist of multiple characters combined. Just looking for the single character emoji will cover most emoji however.

Once you have detected the reacji and what emoji it is, display it as a reaction like you display likes, followed by the count next to it or stamped on it like in the Slack example above.

Examples of receiving and displaying reacjis:

Reacji displayed as a facepile under a post on Seblog.nl. (Actual faces removed for the screenshot, grey rounds contain photo's from Facebook.)

Besides Slack, individuals have started to post reacjis on other silos. 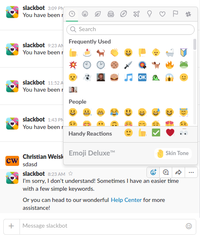 Discord allows you to post reacjis on any message.

Here is how Discord displays a reacji on a message:

To add a reacji to a post, one must click the "Add reaction" button that appears when you hover over a message. Then, one can select a reactji to post on a message.

Here is the reacji selection interface on Discord:

Facebook has reacji (Path-style, as a small set of emoji-like graphics) as an extension of "Like" and calls them reactions. Supported since 2016-02-24 on posts, and since 2017-05-03 on comments. emoji and text (on hover) equivalents:

GitHub also supports a small set of reacji in response to pull requests, issues, and comments (and calls them reactions), since 2016-03-10:

You can POSSE these to GitHub using Bridgy Publish.

Path has had limited reacji, as a small set of emoji-like graphics, since (??? their launch) years ago, and was likely the first silo to do so.

Basecamp replaces their previous “like” functionality with “boosts” which aim to merge reacji with short text reactions and avoids counts. They also only show the boosts to the author, not to others. [This article https://m.signalvnoise.com/introducing-boosts-an-all-new-way-to-show-your-support-in-basecamp-fae325634998] should probably be analyzed more and summarized best practices and indieweb relevant pieces entered in here.

Slack was first to ship a built-in reacji feature that allows anyone to respond to any Slack message with a single emoji, which are then tallied like votes.