So you can invite other people from your own site to others' events that they (indieweb community members like Aaron Parecki and Ben Werdmuller) post on their own sites.

Why RSVP with invitations

So when you RSVP to go to an event you can simultaneously invite others to join you.

Or when you RSVP maybe to an event you can invite others to consider going.

Or when you RSVP no to an event you can invite others to go in your place.

Why publish an event with invitations

So when you post an event you can at the same time explicitly invite people to it and notify them accordingly.

How-tos for invitations are very similar to the how tos for replies so we won't duplicate common info here.

Display invitations on an event

Whether from the event author or received via invitations from others, events can display invitations in various ways:

Publish an event with invitations

How to markup invitations inside and event and notify those invited:

3. Send a webmention to each invitee's homepage (which you've presumably already linked as shown in the example)

Publish an RSVP with invitations

gRegor Morrill has posted invitation posts on gregorlove.com since 2018-10-05

These notes did not include u-invitee markup because I was not familiar with it and was writing the notes with Twitter as the intended destination.

Bridgy implemented this for Facebook event invitees on 2014/02/26. Example.

Facebook has invitation posts but they typically only show-up in notifications.

In addition Facebook has a lot of different UI entry points to invite people to events. 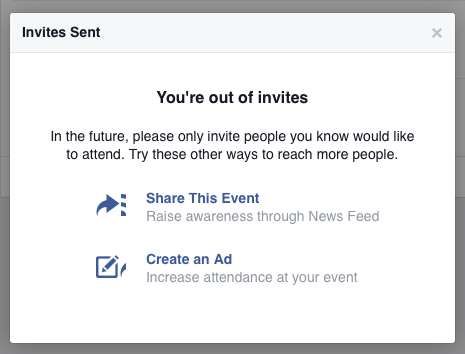 Here is a potential invitation post user flow (from IRC[1]).

POSSEing invitations to Facebook must currently be done manually.

If an invitation post had an explicit in-reply-to to a Facebook POSSE copy of the event, and explicit u-invitee h-card markup of all invitees that included both their indieweb and Facebook profile URLs[4], then a POSSE proxy (like Bridgy Publish) could proxy the invitation to Facebook[5][6], if the FB API actually supported inviting people to events, which as of 2015-03-04 it does not :( [7]

Proxying an invitation to Twitter may be possible (e.g. via Bridgy Publish) but requires defining / designing what a good "plain text" POSSE copy equivalent of an invitation post would/should look like.