GNU social is a free software project that "will be a decentralized social network that you can install on your own server".

GNU social spun out of the GNU FM project to avoid the defacto GNU FM server[1] becoming a social silo.

On 2013-06-08, GNU social incorporated StatusNet and Free Social, so a lot of this page is old StatusNet information as well. [2]

GNU social uses the OStatus protocol (based on Atom or RSS feeds published in realtime via Pubsubhubbub). As a result, GNU social users can subscribe directly to an external site that publishes a Realtime feed.

To follow any Pubsubhubbub feed with a GNU Social instance, simply click the "+ Remote" button in the sidebar when looking at your profile page and enter the URL to the HTML page from which such a feed can be discovered. Some instances run a theme which hides this button (or makes it harder to find). You can always go to /main/ostatussub to subscribe to a feed (such as: http://quitter.se/main/ostatussub)

How does an indieweb site get a proper looking profile on a GNU social site? Compare @tantekcom@tantek.com and @kyle@kylewm.com (which has the same Atom components) 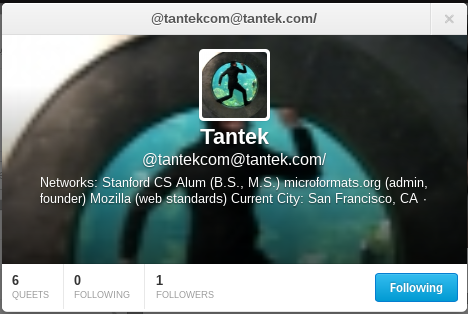 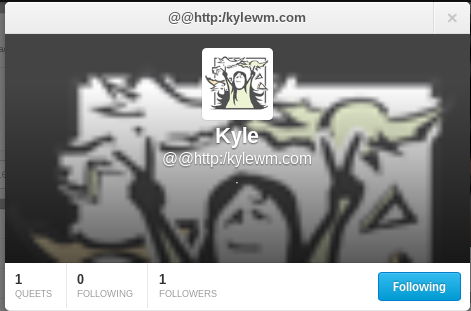 Are there outstanding bugs / issues filed for these yet?

IndieWebCamp participants who are using GNU social on their own site:

As of 2016-02, there are several Twitter lookalike gnusocial instances such as

These feature a public_timeline as their main view in a consciously retro-twitter look. These are based on the Qvitter code open sourced by Quitter.se

In response to Twitter clamping down on abuse, there have also been instances set up that are troll-themed, such as:

(all unlinked due to likely code-of-conduct violations, those curious can copy paste the domain explicitly).

Please enable javascript to use this site.

This is in stark contrast to Twitter (which many GNU social instances are setup as replacements for), which displays just fine without JS.

As a stopgap, there is an invisible copy of the content marked up with microformats2 and thus consumable by sites (e.g. indieweb sites and readers)

Further discussion shows that this depends on configuration. Markup is being added to the qvitter pages

Difficult to get information about

Years ago, there was some confusion on IRC about StatusNet/pump/GNU social[6], but that criticism doesn't really make sense anymore.

There is now an unofficial user manual

There continues to be an active community of StatusNet/GNU social users, many on quitter.se[7], though both pump.io and GNU social encourage users to host their own instances (to avoid becoming de facto centralized, as Identi.ca basically became).