OpenPGP (Pretty Good Privacy) is a message exchange format that uses public key cryptography to enable people to exchange encrypted and/or signed data; on the IndieWeb, you can use PGP to setup your IndieAuth without depending on any silos.

Whilst most often used to encrypt email, this page discusses indieweb uses for PGP.

Pretty Good Privacy (PGP)
This is the name of the original software created by Phil Zimmermann in 1991. It is now owned by PGP Incorporated.
The acronym "PGP" is commonly used as a catch-all when referring to this encryption format, though "GPG" is often the more technically correct term.

OpenPGP
This is the name of the open standard for PGP encryption, proposed by Zimmermann to the IETF. The current RFC is https://tools.ietf.org/html/rfc4880.

Link to your public key

What does "secure communication" between two or more entities really mean?

An entity can be a person, software running on behalf of a person (eg: an app) or an online service (eg: a login service.) Let's just call all these things 'parties'.

Secure communication occurs within a messy interaction of four motivations.

So any solution should identify and solve specific threats, and stay within the level of effort people are willing to invest in it. eg: software that uses military-grade OpenPGP is as good as no security, if using it is so hard that nobody uses it at all.

How to use PGP for Authentication

Provide a link to your PGP key from your home page with a rel value of "pgpkey". Then, when signing in via indieauth.com or other implementations, the site will provide a challenge that you can sign with you private key.

How can Alice increase confidence that this key is really from the person she knows as Bob?

If Bob uses indieauth on his site, a simple check would appear to be for the contact manager to verify and display the mutual rel-me links to the various 'major' silo providers. Alice could quickly check if they point to the "correct Bob" within the silos.

However, an indieweb site runs with decreased security; and some threats are:

1. the site may be malleable - the attacker silently changes data or links on the site before it is noticed. For instance, the key may be changed, leaving the rel=me links intact.

2. the site likely doesn't use TLS - so traffic may be modified similarly, without either party being aware of it.

In either case, a key obtained from the site should be treated cautiously before choosing to use it.

Are there further simple checks Alice's user-agent can perform, that would otherwise be tedious for a person to do manually?

Many people already tweet fingerprints of keys as proofs of ownership of a given key.

A better approach for fingerprinting - Bob still adds rel-me links to his canonical URL as before, but adds his key fingerprint to the linked profile page on g+, twitter etc. This lets Alice's user-agent automatically match fingerprints on the linked rel-me pages.

Now an attacker must be able to edit both the silo's profile page and Bob's canonical page to fool Alice.

User:Ben.thatmustbe.me pointed out that many POSSE sites store tokens to push to twitter etc; so an attacker might actually be able to modify both sites. He suggests it's best to validate at least one rel-me link to a silo whose profile pages are unlikely to be automatically editable by a typical POSSE site. Google+, github?

Bob can also markup links to various tweets/posts/github gists etc. from his canonical URL with something like

Alice's contact manager can choose to follow these as "additional proof", if it knows how to reliably obtain the silo's owner from such links. eg: a github gist url.

KB also has some prototype code that shows and validates such PGP keys and fingerprints, and displays them as follows. 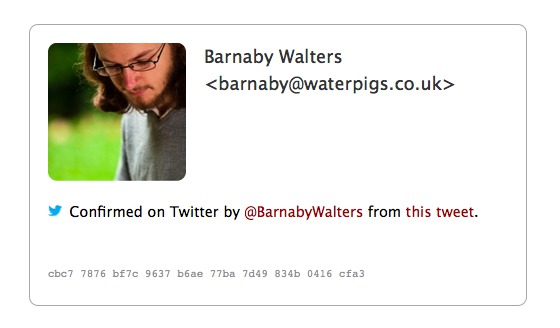 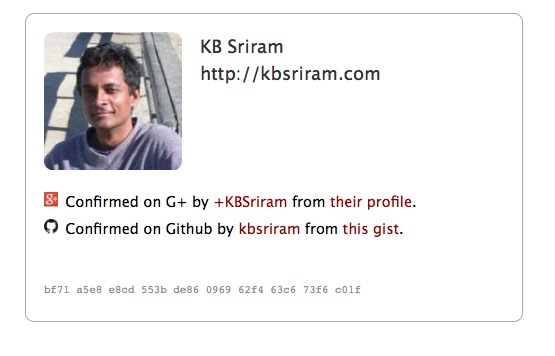 The contact manager shows identities from the fingerprint-matching pages as "confirming" the key, and Alice looks at these to decide whether to add the key.

Prior to each use, the contact manager can also recheck the canonical site (and confirming urls) and flag any changes - trust-on-first-use-then-verify, aka ssh. This would also address situations where Bob wants to publish a new key.

When accessing content from an indieweb site (say) for the purpose of extracting the text for a webmention, how can I reduce the risk that the page was not hacked in some way? I don't want to extract things that might contain malware links or xss content inserted by someone who's managed to hack into their site.

I have to rely that the other person maintains a secure website at all times, or if the roles are reversed - that I have to maintain a secure site at all times; which seems an unreasonable demand for a typical indieweb site.

One approach, at least for static sites where content is generated first on the user's local machine, is to attach a digital signature alongside the content before uploading it online.

Tantek also suggests a link to a signature could be provided from HTTP headers rather than the html page itself.

This is related to private_posts.

I want to send a quick note/photo to one or more of my family or friends. I'm not chatting with them - just something they can look at when they get around to it. I trust them enough to not redistribute it without my consent.

The data is not valuable financially, and best-effort delivery is also fine. I just don't want anyone else to be poking into it [eg: photos of kids, or a private discussion about someone.]

It's important that all of us can send or receive messages from any of our devices (eg: phone or laptop.) Also, I'd like the data to have a short expiry time in the cloud if at all possible - snapchat-ish, at least in the cloud.

How can I set up an indieweb system that lets me do this conveniently?

Because of its async nature, the content has to stored on the cloud somewhere. I want this data to be "safe" even if it were accessed, or archived and examined by anyone.

That is - I'd like to have endpoint-to-endpoint security - an attacker has to put malware on the device (or gain physical access to it) before they alter or look into the messages.

One solution to that could be called pgp messaging.

Alice (alice.com) wants to send a private message to Bob (bob.com), and bob has a public key with the fingerprint '1234'.

On this url, Bob will find an encrypted html page with a redirect to a secret URL. For instance, it could be: https://alice.com/1234/NewBase60_charset_obscure_url.html. The encrypted redirect and the final endpoint are encrypted with Bob public key.

Alice can send a webmention to Bob to notify there is new content. It could also be an RSS feed that Bob fetches from time to time.

The advantage of this solution is that it could work with static and non static sites.

Alice could also hide that she is in contact with Bob by answering a kind of encrypted messages for every https://alice.com/fingerprint request. (Alice has to take care that her server takes same time to compute both answers - for a real fingerprint, or a random one)

This solution requires a pgp plugin on your browser or your indiereader would need to have access to your private key. In the case of the indiereader, if it is not hosted by you, it would be a good idea to use an 'indieweb' sub key, signed by your primary key (Using subkeys).

Here is a link without encryption it is for demonstration purpose. In real life, there would be just files with pgp extension.

The same link with encryption.

As you can see, Barnabywalters uses his fingerprint to be redirected to an obscure URL that just him with his private key can know.

Then the interesting thing is that, I can share my phone number with him, thing I don't do on my public profile. I can share posts and send him webmention, and he can subscribe to an encrypted rss feed.

May not help email security

Fastmail explains why they don't offer PGP - in short, it won't actually improve email security for their users, so they don't bother with it.

Latacora writes about how email is inherently unsafe and how just putting PGP (which they describe as “a deeply broken system”) on top of it is not going to help solve anything.

The least interesting problems with encrypted email have to do with PGP. PGP is a deeply broken system. It was designed in the 1990s, and in the 20 years since it became popular, cryptography has advanced in ways that PGP has not kept up with. […] Even after we replace PGP, encrypted email will remain unsafe.