From IndieWeb
(Redirected from alt text)
Jump to: navigation, search

alt is a required attribute of the <img> element and should be provided in any use of images on indieweb pages from photo posts to featured and other images in articles.

You should add descriptive alt text to all your photo posts and content images added to the wiki for at least a few use-cases:

(this section is a stub)

So far people are using the following tools to add alt text to their photos and other images:

To add alt text to images in the IndieWeb wiki, use the following general syntax:

There is also a custom photosrcalt template that also includes a set up for easy inclusion of images with u-photo markup and alt text using the following format:

More details on images in the wiki can be found here: https://www.mediawiki.org/wiki/Help:Images

How to write good alt text

If it is a

Makes sense read out in context

"...the alt attribute's value should never contain text that could be considered the image's caption, title, or legend."[1]

This is poor advice because:

Instead, see the summary guideline for positive guidance. In particular for this case:

Rosemary Orchard: I write in Markdown, and use the image description as the alt text, so ![alt text](image.ref).

Jeremy Cherfas I too write in Markdown for my site served by Grav and I too try to remember to add a verbal description of the image exactly as Rose (above) does. The Grav post composer automatically inserts (![](link/to/image)) making it easy to backspace and add the alt-text. When I write in Byword I generally remember the format, and I have a TextExpander snippet as backup, but seldom need to use it.

Greg McVerry When publishing on my main site I am often writing in HTML and use the alt text, most of my images are from the Flickr CC Creative Commons Attribution tool and include alt text. When I use Known the photo post type does not allow for the entering of alt text and the photo's title becomes the alt text Example. Untitled photos get no alt-text. When publishing a post in Known you use the TinyMCE WYSIWIG and enter an image description. This image description becomes the alt text.

Chris Burnell: I use the typical Markdown syntax (![alt](src)) for inline images. I have also recently set up some logic to parse a photo and alternate text defined in my posts’ metadata (Example on GitHub).

Chris Aldrich: When publishing with WordPress, I most often add images and media using the "add media" button which pops up a search/selection UI that includes an alt field to remind me to enter the appropriate alt text. If the alt text is left empty, the text editor automatically includes an empty alt="" as an explicit reminder that is required, but empty. Sadly the visual editor doesn't include any indication that the alt text either does or doesn't exist as a reminder to include it. It would also be nice if the alt text field in the UI was above the 'caption' field. For improved UI it would be nice if it indicated what alt text was and why it was important to get more people to include it for accessibility. The idea of alt just feels too much like jargon for the average person to know what it is or why it is important. 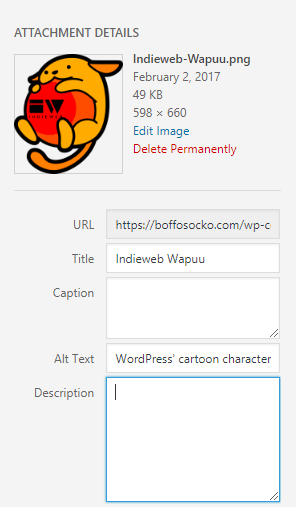 gRegor Morrill: When publishing with ProcessWire, I usually insert images into posts using the rich text editor (CKEditor). The editor inserts a blank alt="" attribute by default. When I want to set alt text, I click "Source" to modify the HTML and update it manually.

Tantek Çelik: Supports alt text on his image posts since 2019-078 (using latest deployed CASSIS auto_link), starting with adding alt text after the fact to his most recent photo post the day before adding alt text support.

Jamie Tanna writes Markdown with Hugo, and uses html-proofer to ensure that all images have an alt tag set.

Add yourself here… (see this for more details) - Earliest post with an image with an alt? YYYY-MM-DD 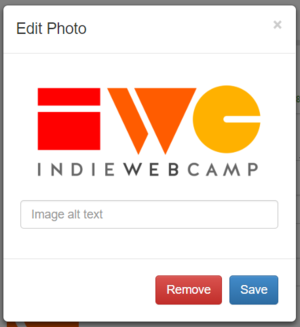 Markdown has syntax for adding alt text to an image embed.

If you use the CASSIS auto_link function (latest deployed version), you can add alt text to your plain text content like this:

And similarly for a linked image with alt:

This is part of a larger alternative to Markdown.

Instagram introduced automatic alternative text as of 2018-11-28. The app also allows you to set custom alt text when publishing a photo or by editing an existing photo.

Alt text on images in a post can cause issues when trying to display that post in a reader.

On adactio.com, the img alt text is the same as the post contents. Since alt text is included in the p-name parsed result, this results in duplicated text for the posts.

Below is a screenshot showing a few recent posts from adactio.com as rendered in an IRC-based reader.

Currently the python mf2 parser does not include alt text in the parsed result, so these posts look fine in Woodwind. However, if it did, as the parsing algorithm suggests, this is how a post would look. (with more representative alt text) 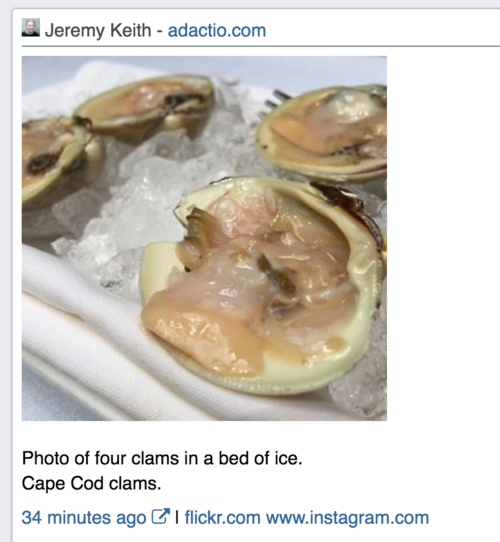 Woodwind has no way of knowing the first line of the name property came from the alt text.

Below are two posts from tantek.com in the same reader. Note that the text of the first post includes "a jpg" which is the alt text of the image.

Resolution: Starting 2019-078, tantek.com supports showing alt text on images so now it just depends on the author taking the time to add them (parenthetically as it were) to each photo post moving forward (and perhaps adding alt to past photo posts incrementally).

Ideas for improving the adding of alt text to images, photo posts, etc.