Moderation is the process of holding comments for review by a human, and sometimes a source of frustration when a comment is written on another site that the commenter has no control over. 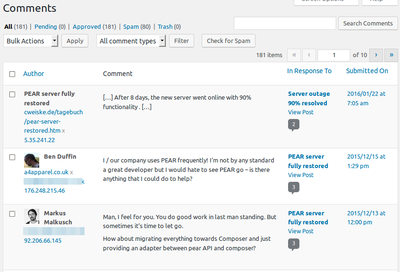 An example of an unwanted comment is on the bottom of this post has been brought in via bridgy and webmention.herokuapp.com - it's not clear which of those services should be used to mark it as not for display. Just deleting it on one or other of them is likely not enough, as it could be brought back by sending the webmention again.

WNYC's On the Media has an interesting podcast segment on moderation and restorative justice: Can Restorative Justice Save The Internet? that has some interesting ideas as well as a case study involving moderation on Reddit.