The reasons to POSSE to Facebook are the same for any other silo destination, staying in touch with your friends:

Not a good reason:

There are multiple ways to POSSE posts to your Facebook profile.

Using a CMS:
(this subsection is a stub and needs expansion / real world examples)

Existing automatable techniques (things you can setup or write code to do for you):

Expanded below with examples:

As of 2018-08-01 The Twitter to Facebook bridge has also been shutdown (same time as their API shutdown).

Tantek Çelik POSSEs notes, articles by name + permalink, replies (including RSVPs) out from tantek.com to Twitter, and then used to use the Twitter/FB integration functionality to cascade (except for plain replies) POSSEing from Twitter to Facebook by default (sometimes FB copies of tweets are manually hidden from timeline). Reasons:

Jeremy Keith POSSEs notes, photos, articles out from adactio.com to Facebook using If This Then That (IFTTT). 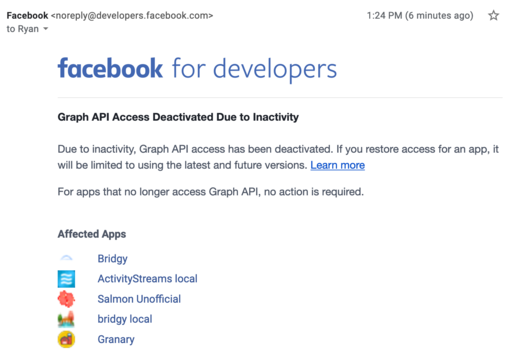 Tantek used to use Bridgy to automatically POSSE photo posts to Facebook (since 2015). On some notes (multiple paragraphs longer than a tweet),

Tantek Çelik manually uses Bridgy Publish (via its web UI) to POSSE a few of his original posts to Facebook, and then manually updates his post storage to link with u-syndication from his original to the FB POSSE copy, since 2014-08-01:

He plans to implement automatic POSSE via Bridgy Publish in Falcon.

Emma Kuo used to use Bridgy to automatically POSSE some posts (using a checkbox in the Neonblog UI to enable it at posting time) to Facebook since 2014-08-01. The original is automatically updated with a u-syndication link.

Barnaby Walters used to use Bridgy publish as of 2016-03-13 to automatically POSSE posts to Facebook. POSSE to facebook can be disabled by tagging the note with “nofb” (for twitter it’s “notwitter”).

Posting to one's wall used to be supported with the Facebook 'Graph API'.

Programming language libraries for doing so:

Some indieweb sites used to POSSE to FB and put in a "See Original" link in POSSE copies of posts there that link back to the original indieweb post! In addition, Bridgy looks for such "See Original" links as part of its original-post-discovery implementation.

Each Facebook post can include one custom "action" with any title and link. The parameter "actions" is a JSON-encoded map that contains a "name" entry ("See Original" in this case) and a "link" entry. Note: Bridgy currently only looks for custom actions named "See Original" (case-insensitive) when doing original-post-discovery.

If you add the "actions" parameter, the request looks like this:

(This is just a rough bit of sample code, of course you'll have to replace the $_POST['text'] and $url parts appropriately for your website.)

It does not appear to be possible to mention tag someone "inline" (like @-mentions on twitter) using the normal /me/feed API edge.

There are a few (less than perfect) alternatives:

To publish a "like" via the 1.0 API, find the Facebook object ID and post to its "likes" collection. The app will need to request the "publish_actions" permission in order to publish likes.

As of 2014-??-??, your site/code must go through a review process in order for your Facebook app to request the "publish_actions" permission for other users.

Aaron Parecki has noticed that Facebook is strongly pushing the JS SDK over making direct API calls. Using the JS SDK has some advantages such as it manages the login dialog and refreshing access tokens. If you use the API directly, your app will be responsible for refreshing the Facebook access tokens when they expire, and tokens can be as short-lived as 1 hour.

There are generally two ways to POSSE an image to Facebook, roughly corresponding to photo vs. featured.

Bizarrely, the Graph API reference claims you cannot post photos via the API, but this is experimentally wrong and contradicted elsewhere in the documentation.

To post a photo, send a POST to the /me/photos edge, with the "url" parameter set to the public URL of the photo. Here is an example of a photo post:

In rough order of implementation:

Screenshot of original on werd.io and POSSE copy: 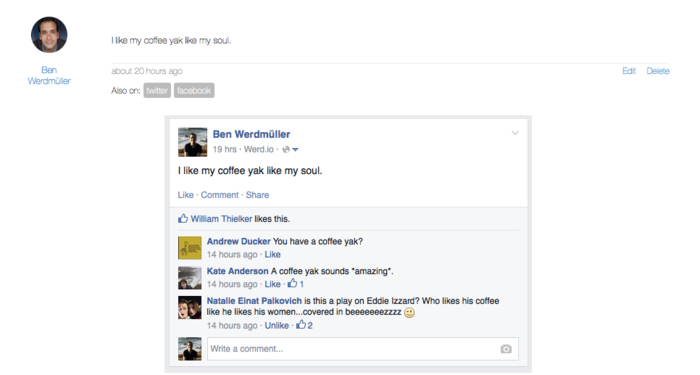 Aaron Parecki uses p3k on aaronparecki.com to post POSSE copies to Facebook since 2014-02-20. On 2014-03-08 he started putting a see "See Original" link on POSSE Facebook copies.

Jeena Paradies uses a simple rails app on jeena.net to post POSSE copies to Facebook since at least 2014-02-20

How we got here

Below are previous experimental examples of syndicating notes to Facebook.

These examples were created with the Facebook Publishing API using either the "message" or "link" parameter or both.

Sent using only the "message" parameter, the citation link is part of the message.

Note with text and link parameter

Sent using both the "message" and "link" parameters. Facebook includes the note text, and creates an inline preview of the page, which shows the note text and the author's photo. Sent using only the "link" parameter. Facebook creates an inline preview of the page which shows the note text and the author's photo.

Sending only the note text and does not include the citation link. This is not recommended.