From IndieWeb
(Redirected from drafts)
Jump to navigation Jump to search

A draft in the context of the indieweb refers to a draft post, a post that an author has partially written, or otherwise does not consider finished.

Drafts are useful for private or semi-public sharing with others for review and feedback before official publication and POSSEing.

Being able to save drafts has more than once saved me from posting something "in the heat of the moment" that I'd have later regretted. They can be a useful saucer for cooling off. Kylewm.com

Some IndieWeb community members are using scheduling to publish drafts at otherwise public URLs, but not have them show up on their homepage (e.g. in their composite stream) or legacy feed file.

WordPress has a draft feature that allows you to save a draft and share a URL to a draft post which does not show up on your home page or any feeds. It has a status field in the API that can be draft or publish

ProcessWire has a published/unpublished flag that effectively allows writing a draft post that does not show up on your home page or any feeds. An unpublished page is visible only to logged in administrators at its permalink.

Known has a public/private/members only access setting per post, so Private can be used as a Draft mode.

Kickstarter supports sharing drafts of a campaign and includes a prompt at the top asking the viewer to submit feedback to the author. 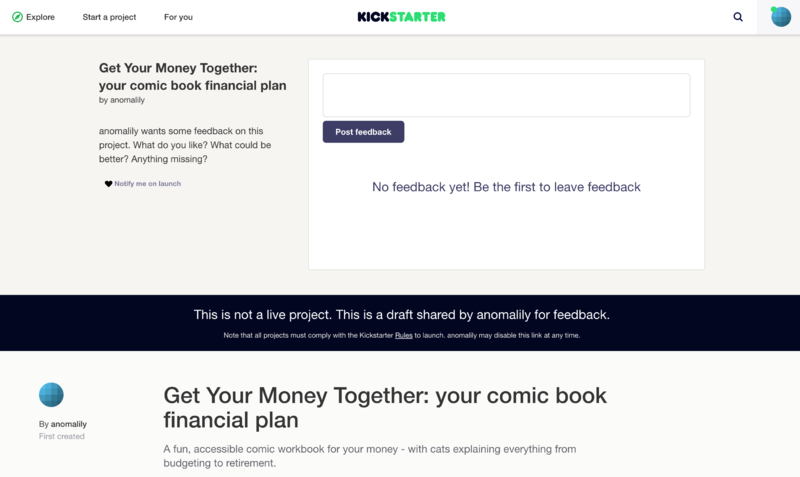 Blogger has a draft mode for posts, which the API exposes with an isDraft parameter

Twitter has a draft mode in its clients, but this is not reflected in the API

Medium has a publishStatus for posts that can be public, draft or unlisted whihc is accessible from the API

UI for many drafts

Anthony Ciccarello Added /drafts page as a list of WIP posts on 2023-01-21. It's similar to a digital garden but with the intention of posting the content later. Draft URLs are also explicitly expected to break. This list of links is manually created to only show drafts I'm okay okay with working on publicly but it's a pain to add each link.

Top horizontal pane search box with a list of hashtags underneath in descending order of frequency (most to least frequent in existing drafts), and clicking them adds them to the search filter without losing keyboard focus, so you can keep typing. They act as whole "characters" inline so you can delete them as just by backspacing and they get added back to the frequency list.

The hashtag buttons are key for lower-effort cluster discovery. Because of them I can just write a new note / post draft any time, put in hashtags, then come back later and quickly see which topics have the most drafts, and split/merge them accordingly into one or more posts.