From IndieWeb
(Redirected from tweetstorms)
Jump to navigation Jump to search 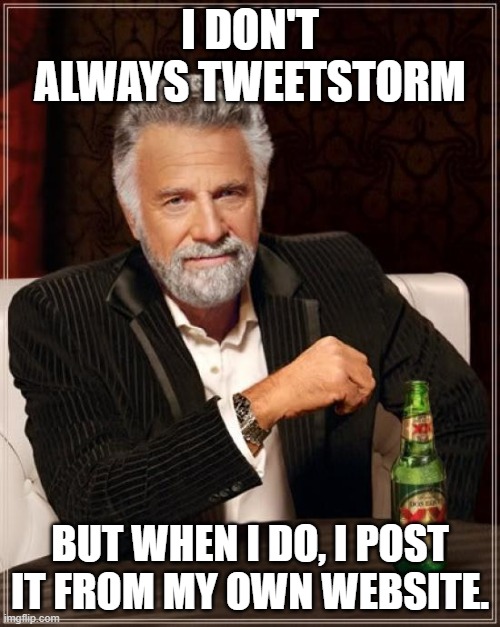 tweetstorm is a series of tweets, each replying to the previous, often each numbered so the sequence is clear, as a method of expressing a longer series of related thoughts as a single thread on Twitter.

On/about 2019-04-24 Twitter changed their UI (on web) to allow users to edit multiple threaded tweets at the same time and click one button to publish them all simultaneously. 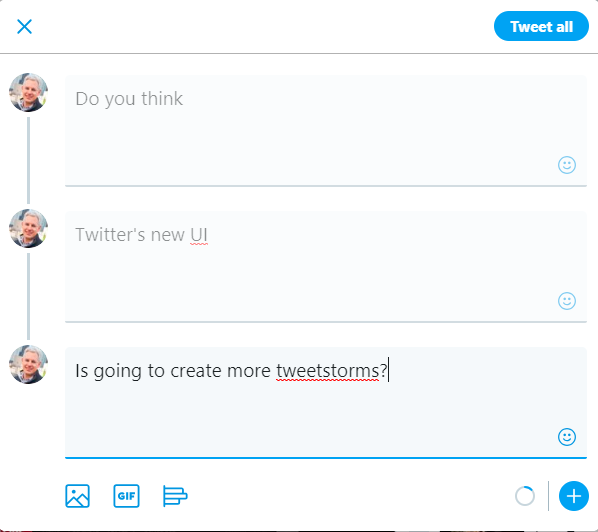 Should I post this in the CPLC moodle? I don't even know my dudes. Not gonna lie, I'm 10000% more comfortable writing this stuff on Twitter bc it feels less formal & therefore doesn't have to be "organized" or "actually good" & can just sometimes end up being surprisingly useful?

Kevin Marks often tweetstorms live notes (using Noter Live, without numbering tweets) from conferences and talks, and then later assembles them into a blog post on his site kevinmarks.com.

Chris Aldrich only very occasionally tweetstorms (using Noter Live, without numbering tweets). Most often it is from conferences, talks, or meetings and then he later assembles them into a post on his own site.

For more "traditional" tweetstorms, I:

The process is an odd melange of both POSSE and PESOS, but it's typically geared towards reaching a broader Twitter audience over the traditional audience of my personal site. The benefit is that those who are subscribed to my personal site get a better experience.

Marc Andreessen often posts tweetstorms (on https://twitter.com/pmarca) that seem sufficiently structured that more than one site has sprung up which reposts them as complete blog posts:

He sometimes reposts his own tweetstorms on his own blog:

There are many services which recognize tweetstorms and “unroll” them into single page permalink posts, (semi-)automatically, usually triggered by an @-mention of the service and a keyword like “unroll” or “compile”.

tweetstorm.io is a site that detects tweetstorms on Twitter user profiles, displays their recent tweet storms, and provides permalinks for each tweetstorm they detect. E.g. recent tweetstorm(s) of a profile:

ThreadReaderApp (aka Thread Reader) is a service with a Twitter account (@threadreaderapp) that will convert a tweetstorm into a single page post by replying to any tweetstorm’s post with the key word "unroll" E.g.:

On 2020-05-28 the service began unveiling a beta feature that allows users to syndicate (PESOS) Twitter threads to their personal websites using Micropub.

Stormcrow is a native iOS app for writing tweetstorms. It was created and released on 2017-03-27 by Jared Sinclair.

Typefully is a Twitter editor/client primarily intended for composing and posting tweetstorms to Twitter. Also includes the ability to create multiple drafts, schedule tweetstorms for later, and importing content.

Chirr App is a Twitter editor app for creating tweetstorms and helping to split text, providing analytics, add tweets to threading, and reply to posts. There is a free tier with additional features for $4/month (in January 2022).

Threadjacking is a microagression where a reader may interject a series of replies into an existing thread with a different topic. Derived originally from email lists and Bulletin board the practice is evident in Twitter threads.

Other practices of thread jacking can include examples of mansplaining by defining terms the author may already know, trying to elevate their own work by linking to the author's threads, or snitch tagging a person the author is discussing.

How do you cite repost or quote

How do you cite, repost, or quote a tweetstorm?

Amy Guy suggests a single repost, with individual blockquote elements for each tweet of the tweetstorm with different dated permalink for each.

How do you POSSE to tweetstorm

If you write your own blog post (article), but want to POSSE it as a tweetstorm, how do you do it?

Ben Werdmüller was wondering about this.

See Indieweb example above by

One idea would be to publish a note and then if you publish a reply to that note in your publshing UI you could hit a "storm" or "stream" button. This edite the original note putting in a rel=next. The second post would would get a rel=prev. This pattern would continue until someone hit end "storm" button.

Or perhaps tweetstorms "work" because of the Twitter UI's constraints.

Perhaps an indieweb tweetstorm UI should similarly build on a note with a chain of reply posts.

There appears to be two kinds of tweetstorm syntax:

Articles with commentary on Tweetstorms

There is a wide variety both for and against tweetstorms: