From IndieWeb
(Redirected from remote-participation)
Jump to: navigation, search

remote participation refers to good practices for enabling people to take part in IndieWebCamp events at a different location and collaboration across locations.

For remote participation at events, the built-in camera and microphone on laptops or mobile devices is usually not sufficient. To get a better quality link between locations, a separate camera with a microphone designed to pick up sound in larger spaces is needed.

Minimum recommended hardware for an individual joining a remote event

Helpful for an individual

Helpful for a site/room with multiple people:

To get better sound from the remote participants, either hook up the computer to a TV and use the built-in speakers, or get some nice external speakers such as the Bose Soundlink Bluetooth speaker.

Alternately a good external speaker/mic for conference will work, such as the Jabra Speak 510.

Please collect notes and experiences from remote participation at past IndieWebCamp events. Both organizers as well as participants are encouraged to document what they used and how well it worked.

We used the Logitech HD Pro Webcam C920 at IndieWebCamp SF 2014 with several remote participants, all of who said they had no trouble seeing and hearing what was happening in the room.

In the main room, we used an iPhone with the Jabra Speak to livestream the intros and demos. This was a one-way stream. This worked best when the iPhone was about 8 feet from the presenter and TV. When the iPhone was in the back of the room the slides on the TV were barely visible.

The small breakout room had a laptop running Google Hangouts On Air (a Hangouts chat that also publishes to YouTube), with a wide-angle USB webcam and a USB microphone run to the table. The audio and video of the room came out well, but the computer was pretty far away from the table and also didn't have good speakers so we weren't really able to interact with the remote people.

The large breakout room used the venue's Bluejeans account for remote participants to join. This provided a good quality audio and video experience remotely, but we were not set up to be able to record those meetings. Instead, we recorded the room using the iPhone/Jabra pair used in the main room. The speakers in the room were good enough that the remote participants audio comes through okay in the recording from the room.

Utrecht was the second IWC to use Zoom.

For the welcome, Keynote and intros we used an iPad to host the session connected to a Jabra 510 for audio, and put everything else through one laptop which had a 1080p external webcam (Aukey) connected to it for better video of the speaker who shared the screen through Zoom which meant their video should also have been displayed.

For the final demos we connected one laptop to the projector and everyone else shared their screen via Zoom to this laptop which was ideal for the remote participants (better than the one demo which used the iPad to record the projector screen).

Rosemary Orchard brought the equipment for recording the sessions.

Mozilla Berlin did not have the ability for its system to use the IWC Zoom accounts. Organizer Yulia set up the intros and demos using a Mozilla account...but therefore no access to the recordings. Intros and Demos were recorded by the camcorder, HDMI recorder, and the digital audio recorder.

The remaining sessions were scheduled either with the Android TV equipment or an iPad and equipment brought by Template:Rose.

The camcorder video and audio picked up the room during the entire event, except for 2 issues. One at the beginning of demos where the audio will have to be spliced in from the backup copy, and one from the intros where the device went into power saving mode.

Since there was a desire to project things on the screens during the sessions, input from a laptop was displayed on the screens. This had two net issues. This would not be present for remote participants and it was discovered the Android TV boxes need to be actively hooked into HDMI or they go into power saving mode, terminating the screens.

The Android TV boxes had some intermittent connections issues prior in NYC, but once they were connected there, even though this did take some fiddling, they did not require reboot. There was a report this was not the case in Berlin, suggesting the necessity of further adjustment.

This would suggest the process of having the presenter's laptop logged into the Zoom session, with microphone and video off, is the most reliable way to record this.

Remote participation at IWC SF will be produced by

David Shanske. The same equipment used at IWC Berlin2 is set to be used, with the following noted exceptions.

See Zoom for tips on configuring your Zoom app for the best experience.

The community has three Zoom accounts for use for IndieWeb events.

During an IndieWebCamp, all accounts except the Orange room are set to automatically record the meetings. Recording can be enabled or disabled manually once in a meeting, but the accounts are set to auto-record to make it easier to capture IndieWebCamp sessions.

Demo presentations can be done by logging into the Zoom, muting audio/video as appropriate, and sharing your screen. 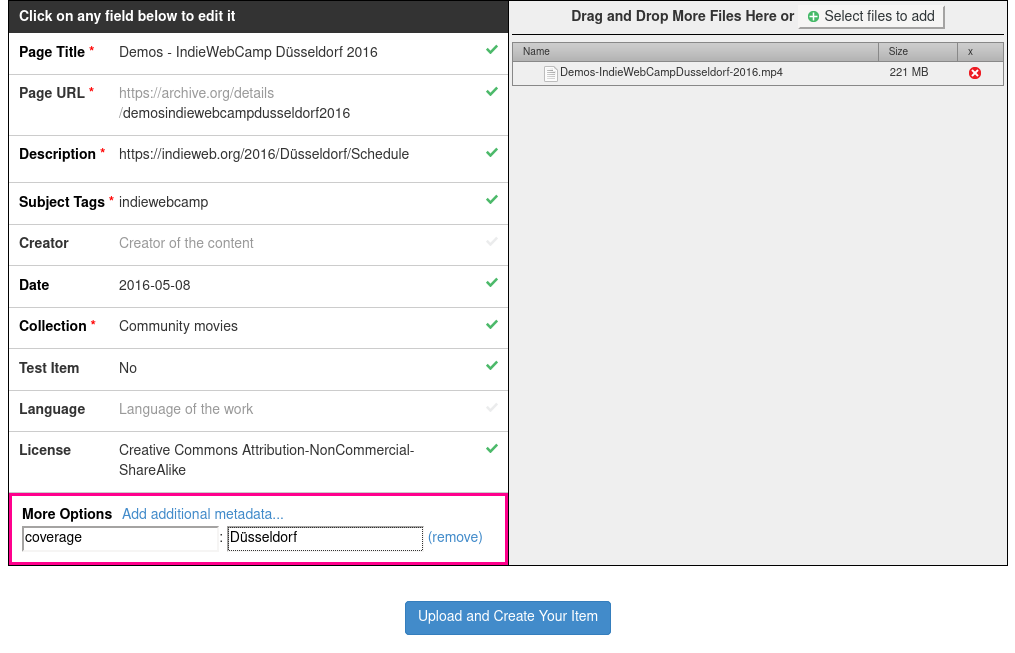