Comments are displayed in the context of an original post, and may be a mix of syndicated reply posts from other sites received via Webmention, as well as locally created comments.

Goal: display received comments in high fidelity, at least as nicely designed as the comments that are "natively" displayed on blog posts and silo posts (e.g. replies on Twitter posts, comments on Facebook posts, Flickr/Instagram photos, etc. - see Silos below for analysis of their practices).

Per Accept a comment, your system should already be:

And when your server receives a webmention URL:

With that information a sufficiently rich display should be possible in a "Comments" section in the footer on the original post permalink. Add to that for each comment:

And you've hopefully got a comment display of similar fidelity to anything the silos have.

Note: some of this has been implemented!

Even better, if you can display comments in real-time on people viewing a post, when they're received by your server, it looks amazing to the user. Idea/challenge 2013-09-30.

The post the comments are in reply to should be a top-level h-entry, and comments on it should be marked up as h-cites nested under the comment property. For example:

What each of these do:

Which documents a bunch of pre-indieweb thinking of how to markup comments, especially when comments were only made natively on a post directly, rather than being propagated peer-to-peer.

In general this "how to" and the indieweb approach is a further simplification of the microformats comment-brainstorming, with properties added as needed by real world needs.

Note that class="p-content" is used for the body of the comment, here's why:

How to delete comments received from other sites.

If an indie web reply/comment post is deleted, that user's site is expected to send another webmention accordingly.

If when attempting to retrieve the reply permalink URL your server receives a 410 GONE, then your server is expected to delete the existing syndicated copy of that comment.

Aaron has also supported real-time display of received comments on his posts on aaronparecki.com using p3k since 2013-10-13.

Pelle Wessman using webmention.herokuapp.com since 2014-01-04 (first comment received) and u-responses to link to an external h-feed with a list of all received comments. Example:

Henrik Carlsson displays comments on his site. He does not just show them on the individual post permalink pages, but also below posts displayed in feeds. Listen to his argument on this.

Tom Morris sometimes adds links+favicons to a “this post is discussed further at” section (Archived example).

Tantek Çelik sometimes maintains a citation list of posts which link to one of his posts, e.g.

And more recently is experimenting with manually incorporating indieweb reply posts into a comments section:

Kartik Prabhu sometimes manually adds comments/replies to his comments on other sites that don't support webmention:

Laurent Eschenauer using Storytlr: displayed comment posts from the IndieWeb marked up with h-entry and received via pingback, and comments posted locally on his posts, in an integrated time-ordered "Comments" section, since 2013-04-19 (til ~2016). e.g.:

Some sites have a policy around what kind of comments are permitted on their site and what to expect before, during and after a comment's posted.

It can be useful to set expectations for others about what one will allow or not on one's own site.

Ideally people are posting their comments and replies on their own sites and sending webmentions, so even if their content is moderated or removed from the site to which they're replying, they still own a copy of the original content.

Tumblr groups various different response types into a generic “notes” feed, at the bottom of each post (example). They show:

Twitter shows all tweets which are both in-reply-to a particular tweet AND contain the original tweeters @name below the tweet metadata in chronological order. They provide a “reply” box above (?) the reply feed (example). The tweets have:

Twitter replies are ordered according to an undocumented "relevance" heuristic https://help.twitter.com/en/using-twitter/twitter-conversations#ranking

Facebook treats comments as completely secondary to “full” posts, showing them in chronological order beneath the post’s action bar. Facebook only show the latest ~4 comments if there are more, and display the leave-a-comment box below. They have: 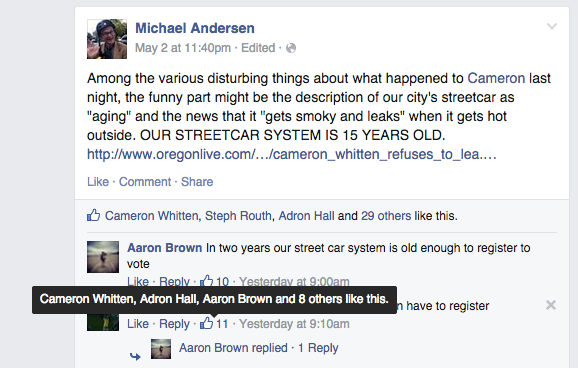 There is no consensus on the use or avoidance of "native" comments on personal sites. There is some evidence that such comments are often filled with spam and require extra admin tax. However, there's also the reduced effort it takes for other people to participate on a blog without having a domain or having to log in.

Some silos have a comments embed which is used by various sites to host comments elsewhere:

shutup.css is custom stylesheet that hides comments on many popular websites. As such it is empirical research on how silos mark up comments. See the CSS for details.

Difference between comments and mentions

If the original post does not have an explicit in-reply-to property indicating that it's a direct reply to your post, then you should not present it in the same style or group as you present comments. This can mislead viewers to think that a generic mention is a comment on the post, which can change the interpretation of the original post out of context. For example, see the exchange below for an illustration of how presenting a mention as a comment can change the meaning.

Why use p-summary when I can truncate e-content

Q: I guess if I grab the e-content and think it's too long, I might as well just truncate it myself. why would I need the p-summary?

A: Because the p-summary is likely (or even just possibly) explicitly crafted by the author/publishers to be a more meaningfully truncated version of the e-content than you could yourself automatically truncate.

Q: Why use u-comment around the comment instead of p-comment?

How to mark up nested comments?

Nested comments could easily be caused by Salmention. reply-chain has some examples of people showing multiple replies.

The only one currently nesting comments seems to be

This mark-up could be repeatedly nested.

How do you scale the display of hundreds (or more) of comments or responses in general?

Similar to how many use facepiles to collapse the display of likes and reposts, there may be opportunities to collapse displays of comments.

E.g. Some prior art here from forum software which tends to show a list of threads, then you have to click into a thread to see the comments on that thread.

(this historical section could be moved to its own page)

Included here for thoroughness / historical purposes - a critique of existing specifications for display.

Summary: Existing specifications either don't say much or provide bad advice for what to display (if anything) in response to receiving a webmention.

The TrackBack Specification (and Trackback Wikipedia page) doesn't appear to have any explicit implementation guidance for how to display trackback pings that have been received.

In practice however, many CMS's display trackbacks in a section explicitly labeled "Trackbacks:", and for each such trackback ping:

See Pingback: Poor display for detail on how the specification itself provides very poor advice on display.