From IndieWeb
(Redirected from followings)
Jump to: navigation, search

follow is a common feature (and often UI button) in silo UIs (like Twitter) that adds updates from that profile (typically a person) to the stream shown in an integrated reader, and sometimes creates a follow post either in the follower's stream ("… followed …" or "… is following …") thus visible to their followers, and/or in the notifications of the user being followed ("… followed you").

Another key difference is that friending typically implies many more permissions between the parties, e.g. in Facebook the ability to write posts on each others's "walls".

Explicit follow posts can serve as a useful historical bookmark of when a particular online relationship began.

A feed of follow posts could potentially be parsed to create a master following list (similar to an OPML file) that could potentially be used as input into one or more readers to provide better data portability instead of recreating lists when moving from one to another.

Some will make explicit follow posts as an external indicator that they find a particular person/thing/account interesting and/or useful.

In the early days of Twitter this morphed into the idea of a "Follow Friday" where people would make posts of accounts they followed and recommended on the service along with the hashtag #followfriday or sometimes #ff for short. These posts, while not specifically posted contemporaneously with the actual follow, were traditionally meant as recommendations to their followers of other interesting accounts worthy of following. These, like Twitter lists, were subtle reincarnations of the blogroll.

Chris Aldrich has begun to actively create follow posts on 2018-02-16. He keeps a list on his following archive. They're tentatively marked up with either p- or u-follow-of and he actively sends webmentions to sites he follows. Post Kinds Plugin for WordPress has a reserved type for follows which he modified somewhat and activated. Some of his follow posts also have SubToMe buttons which allow visitors to quickly follow those same pages/feeds--see for example: [1].

As of 2019-02-20 Chris created and maintains a Followers page on which he collects Webmentions and notifications of people who indicate they are following his website or who list him on their blogrolls. The Wordpress Webmention Plugin/Semantic Linkbacks plugins for WordPress in general have also been modified so that WordPress-based sites can accept and easily show these types of follow webmentions.

He also maintains a following page at [2] which has associated OPML feeds for use in subscribing in readers as described at the bottom of that page. He's documented some of the creation of this page using WordPress at [3]. He also maintains a feed of follow posts which could potentially be parsed to create OPML files or similar functionality to port data to and from readers. He's considering marking up follow posts with XFN as well to use that data in the future.

Eddie Hinkle created his first follow post on 11/25/2018. He started with creating follow posts for Mastodon users first because of two reasons. Mastodon users have only one feed, so the follow post is simpler to create (where as IndieWeb people might have several feeds I follow). Also Mastodon users don't have much visibility outside of Mastodon so in order for people to be aware of who I am and that I am following them, I needed to create a follow post to send to Bridgy Fed.

Greg McVerry added a following page on September 11, 2018. He keeps a list at [4]. Greg used the WordPress Links Manager and the Link Page plugin. He then published a following post type after adding a link:

Amy Guy displays follows posts since 2015-04-27, see list at https://rhiaro.co.uk/follows (but they also show up mixed in with other post feeds). They were previously marked up with u-x-follow-of on the URL of the person/site followed, but as of 10/30/18 seem to be without such markup.

When an ActivityPub (eg Mastodon) user follows a IndieWeb Bridgy Fed user, it translates that to u-follow-of #microformats2 & HTML and sends it to the IndieWeb user as a webmention.

Likewise, when an IndieWeb user sends a u-follow-of webmention to an ActivityPub user via Bridgy Fed, it translates that and sends an ActivityPub Follow activity.

The page: https://unicyclic.com/indieweb looks for follow posts when receiving webmentions, and will add the author to the planet on that page by looking for a feed to subscribe to based on the author's url.

Feedly uses the terminology "source" in the interface. You can add a new source to follow, and the prompt asks to "search by title, URL, or #topic".

Entering a search term will return feeds that match the term. It is not obvious what is being searched, whether it is limited to blogs already being followed by someone, or if there is some other database being searched. 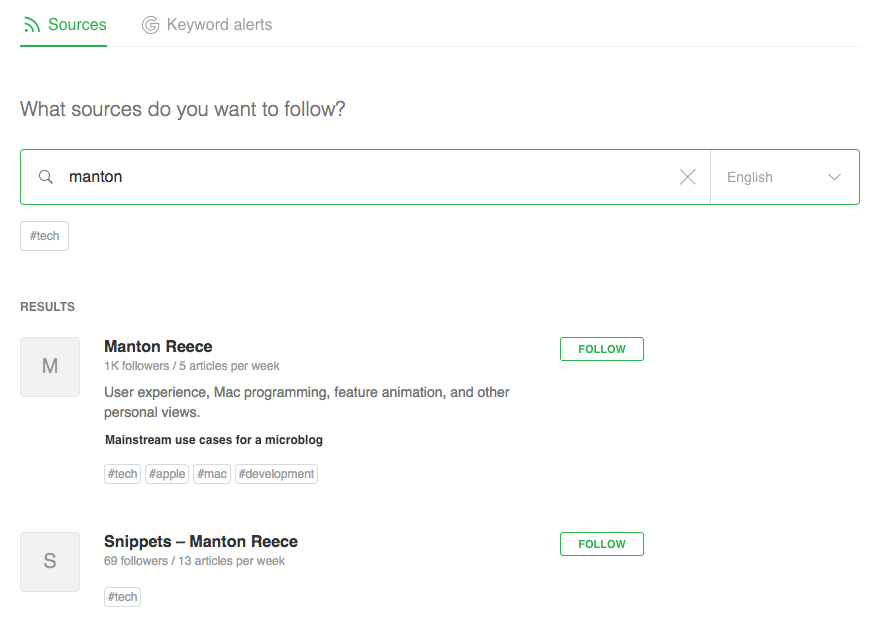 If you enter a full feed URL, such as the JSON Feed URL below, that exact match will be the first result.

After the search result is returned, there is a "follow" button next to each, as well as some additional information about the feed. The following information is displayed if available:

Clicking on the feed name will pop open a modal dialog with a preview of the items in the feed. 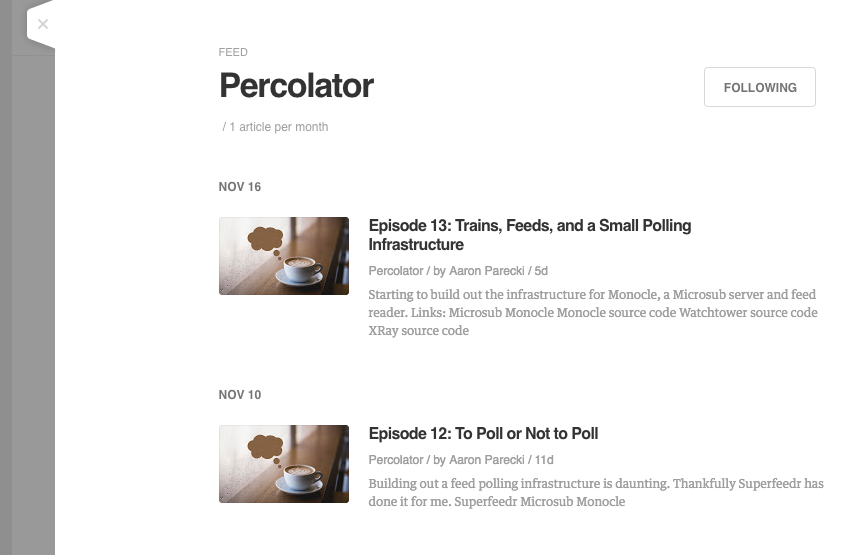 Clicking on the "follow" button will open a menu to select which of your "feeds" you want to add this source to.

FeedHQ allows you to give a name to a feed, and you can choose which category it should appear under in the reader interface. FeedHQ requires that you enter the full feed URL when subscribing. If the feed URL is valid, you will be subscribed immediately.

If you enter a URL that is not a recognized feed format, it shows an error after submitting.

TODO: This section needs a summary of the actual conversation

There was an in-depth discussion in the chat about the difference between following people and following feeds and the differences between RSS and Social Media in that way. Conversation starts here and ends here.

Eddie Hinkle pointed out a challenge with following IndieWeb users with potentially multiple feeds rather than a Twitter or Mastodon user which has a single user profile and feed at the same url.

I created my first follow post (which was actually for a Mastodon user via Bridgy Fed). It worked well because I was able to do a u-follow-of with an h-card where the url of the h-card pointed to the Mastodon users profile. I think the part I'm stuck on is when I am following a person's feed that is not on their profile. I still want my follow post to be their h-card. But I think I also want to include the url of the feeds I am following. Marking them up as u-url is wrong because its not about identity, but rel=feed wouldn't be restricted to the h-card. I think we might need a proposed mf2 h-card property that denotes a feed url of some sort.

Why create/publish "follow" posts that say 'A followed B' (or 'A unfollowed B').

Tantek Çelik: When I post a follow post of someone on a silo, ideally I would POSSE that to the silo automatically, through a silo API, or at least via Bridgy Publish:

Every silo gives you the option to be notified when someone follows you. Is anyone sending/expecting webmentions for this?

Could this be done as:

Following can be considered synonymous with subscribing, for example via a reader to consume content from a website or feed. This makes sense on platforms where each person has only one feed (eg. Twitter). However it's worth noting that one person or site can have multiple feeds (different types of content, different topics etc) so it might be useful to differentiate between following a person and subscribing to a feed.

If one is no longer interested in receiving updates from a source, they must perform an unfollow which is another manual action.

Some examples where this could be really useful are:

The first example starts to border on the territory of notifications in providing simple UI feedback to a user!

(this may deserve its own page at some point, especially to distinguish in-silo follow buttons from cross-site follow button webactions)

"Follow" buttons are a popular and reasonably well understood convention in various service UIs (screenshots needed in examples above), thus it makes sense to develop an indieweb equivalent (beyond the existing "Subscribe" links/buttons).

With an indie reader you can potentially follow any site. woodwind already has a subscribe endpoint that works with a URL, so a bookmarklet is easily made:

Start with experimenting with SubToMe to learn and understand how that works, before designing a generic "Follow" button or webaction (markup, indie-config handler etc.)

As a webaction, you don't necessarily want to subscribe to the page you are on - for example twitter supports follow on any user in the visible thread - the indie equivalent to this would be adding follow buttons to author urls in replies, comments and other webmention presentations.

On several silos follower counts are seen as important feedback on one’s work as well as a way of showing potential employers and advertisers that people like the content you are putting out there. The number of subscribers on YouTube is one such metric.

This means following out-of-band, e.g. through the use of feed readers, is taking away important feedback from content creators.

(question: some feed readers identify subscriber numbers while fetching feeds. how common and reliable is this? (only useful for feedback to publisher obviously, not as social signal to others) – sknebel)

The article "The Follower Factory" in the New York Times 2018-01-27 has a cautionary tale about bot following factories that could inform the value of following as feedback. How can we build to prevent this type of gaming so that the feedback has some actual value?

Early examples have been using a follow-of property on their posts. A minimal follow post based on a note would be: