From IndieWeb
(Redirected from checkins)
Jump to: navigation, search

A checkin is the action of checking into a location and sharing that information. The term is often also used as a verb, to check in.

The indieweb community is exploring how to post checkins to one's own website (likely privately), and how/when to syndicate (in POSSE style) such checkins to checkin-related community sites.

Why should you publish checkins? A few use cases:

If a high enough percentage of your friends use checkins, or view them, you can checkin to increase the chance of serendipitous meetups happening[1].

But to enable this use-case, checkins have to be really simple and unobtrusive, i.e. like the old Dodgeball txting UI was so simple that it made it very efficient to do so, so more people did so more often, thus enabling serendipity.

I'm entering a specific venue, I'd like to quickly/automatically capture the fact that I'm entering that venue (similarly for exiting) for personal logging / quantified self purposes.

Personal tracking could be done purely with private posts, however, friends-only checkin posts, without any expectation of anyone showing up, serve the purpose of also letting friends know where you are (and thus providing a feeling of being implicitly connected, even if mediated through such an indirect means)[2].

I'm visiting a city other than my home town, and rather than try to figure out who I know may be in that town at the moment and compile far too many explicit messages or a long BCC email, I'd like to announce to my friends who happen to also be in that city that I've arrived there and will be around a bit in case they'd like to meet up.

I'm out at a coffee shop and want to quickly see if any friends are are nearby and might interested in getting brunch/lunch/dinner/drinks together.

finding people in a crowd

I've just arrived at a busy place/event, and I want to see if other people I think are coming have arrived yet so I know whether to look out for them.

why not to checkin

of course if you want to include latitude/longitude information for the venue, then your h-card will be larger:

Most consumers of checkins will ignore the name of the h-entry, so that is really only there for fallback for consumers that don't recognize the checkin property.

What are best approaches to POSSEing checkins?

Ben Werdmüller POSSEs his checkins to Foursquare with Known.

Could also create a Bridgy Publish feature that looked checkin post with a Facebook venue URL and then POSSE the checkin to FB.

For those not using POSSE yet.

Aaron Parecki, PESOSes your Swarm check-ins, photos, and "with..." person-tags to your own site via micropub.

Dan Q has implemented a plugin which streamlines PESOS of geocaching logs from the dominant silos (e.g. Geocaching.com) into WordPress.

Barnaby Walters is using Taproot on waterpigs.co.uk to post notes with location data (including rev-geocoded address data) represented with an embedded h-card venue and in an embedded map, since 2013-01-24. Currently manually tagging specific check-ins with #checkin, but is working on adding richer venue information. Examples:

Tom Morris is using Ferocity on tommorris.org to publish notes with venue data in an embedded h-card with geo microformat hyperlink (with title="lat;long") since 2013-02-02 . Examples:

Michael Owens is using indie.js to post checkins with POSSE to Foursquare since 2014-09-07 e.g.,

Ryan Barrett is using WordPress with his own modifications to post checkins since 2014-11-13, usually PESOSed via ownyourcheckin, occasionally manually POSSEd to Facebook, e.g.

Ryan Rix (rrix) can post checkins from Arcology] since 2016-04-13 by creating a post with the CHECKIN tag on it and then calling a function `arcology-checkin-get-venue-id' which calls out to the Foursquare API to pull and cache the information for a venue.

Martijn van der Ven posted his first checkin during HWC 2016-12-14 based on a discussion of the format on IRC.

Sebastiaan Andeweg also posted a checkin during HWC 2016-12-14, from the same venue as

Martijn van der Ven. His CMS recognises the 'checkin' field now and renders it as a p-checkin.h-card with .p-name and .u-url. No real posting UI or venues yet. 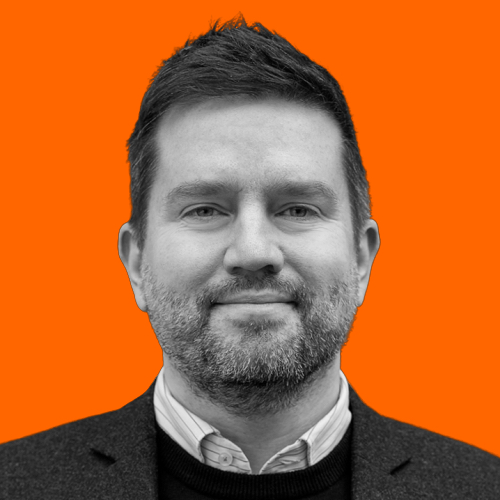 Barry Frost posted his first checkin via Micropublish on 2017-03-15 to his Transformative site. He then used OwnYourSwarm to post his second checkin on 2017-03-20.

Eddie Hinkle added support for posting checkins using abode on 2017-04-21. This is powered by using OwnYourSwarm, and He is importing previous Swarm posts as well.

Ravi Sagar is using Drupal site to post notes with location. Not yet using the h-card format though. Also using another Known site http://www.sagar.ravi.pro and evaluating how checkins can be sent to Foursquare and vice versa.

The venues are filled in with curl (for now), an interface is planned.

The checkin property in Micropub can either be a URL (then it's fetched and a minimal h-card is created to help XRay parse the checkin) or an h-card object (in which case its inserted directly). The h-cards are stored in the /hcards/<id> (no listing of h-cards for now, but geoqueries are supported!)

capjamesg uses his own Micropub client to publish checkins on his site. He also uses OwnYourSwarm to syndicate Swarm checkins back to his own website.

Checkins are listed on a dedicated /checkins page which shows a feed of checkins. The feed is marked up using the h-feed microformat.

Here is an example checkin:

Some folks have experiments or prototypes of posts resembling or approximating checkins but are lacking key information in some way, e.g. explicitly marked up location information.

Tantek Çelik has manually PESOSed a couple of checkins to his site tantek.com from inadvertent Twitter cross-postings from Swarm on 2015-03-28:

These posts are notes that show how a checkin could be presented in plain-text form, i.e. how a full checkin post could be POSSEd to Twitter, based on how Swarm cross-posts checkins to Twitter. Note how the Twitter copies have a permashortlink after their text content that links to the respective Swarm posts.

Past discussion sessions on indieweb checkins:

Pretty good notes in there that could be abstracted and captured in general form in new sections here.

More explorations/brainstorms than FAQ yet.

just a note with a location

Or is it just a note with location information?

Or does a note with location information become a checkin only when the location is a specific venue?

E.g. what are the user-expected/intentioned differences between:

The posts page has some discussion about the general question about explicit vs. implicit post kinds.

More ideas than creations, some thoughts about how individual indieweb community folks want to do indieweb checkins.

I'd rather post a check-in on my own site, and have it use a venue URL that is *also* on my own site. Then at that indieweb venue URL, it can link to equivalents on Foursquare, OSM, FB, and whatever other centralized venue databases are created in the future. - Tantek [7]

In general it is good to use multiple source of geolocation information in order to increase accuracy and decrease latency to provide this information when querying for and presenting (multi-factor prompts) nearby venues.

GPS is great. Except when you are inside a building - it doesn't work. Then you go and get on the Tube, and pop out the other side. It takes time for GPS to seek. You spend much more time waiting for GPS to work out where you are than you do just typing in the name of the bar or whatnot.[8]

wifi-assisted location determination can do better than GPS when inside a building.

Last time(s) you checked in (or GPS was detected), you were moving in this direction at this pace, therefore you're likely at this location now.

Like other types of posts (e.g. likes), it makes sense to figure out a plain text design for checkins, for various contexts.

Use-case: wanting to checkin to a location without (good?) connectivity.

Checking in to Events

Swarm provides a feature that allows users to check in for an event while checking in to a location.

How should this be displayed and represented on an indieweb site?

The following ideas were iterated on, perhaps even in the wild, but have been abandoned for various reasons.

As a result of a brainstorming session about ActivityStreams and microformats at the 2012 Federated Social Web Summit in San Francisco there was a proposal to use h-as-* prefixed (sub)types for posts as a way of representing ActivityStreams post types explicitly in microformats.

One of those was h-as-checkin.

As use of explicit post types have been gradually abandoned in various UIs (being replaced by generic posts with any number of user-optional properties), the use of explicit types in markup has similarly been abandoned (UI leading/driving the plumbing as it were), including h-as-checkin. post type discovery shows some current thinking regarding post types.

Swarm, formerly Foursquare and still made by the company by that name, is a popular checkin client. 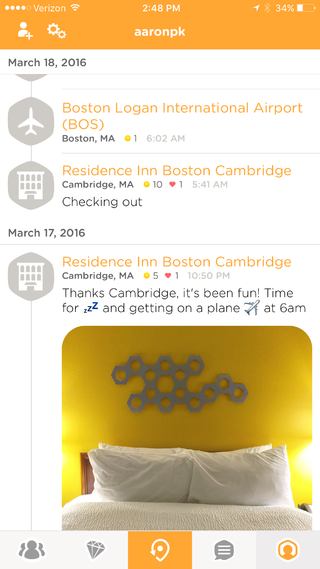 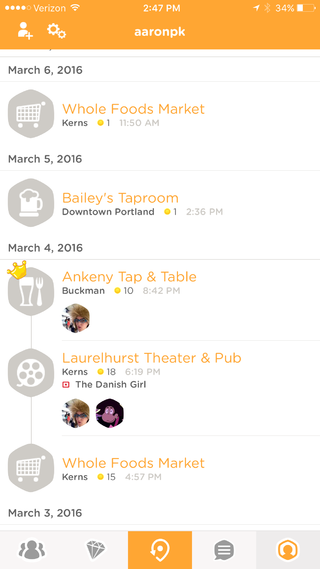 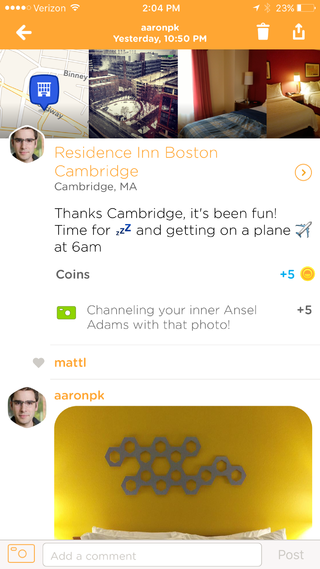 Swarm has a single "post" button in the middle of the row of buttons at the bottom of the default homescreen iOS dsiplay that looks like a map drop pin where the outline of the pin has a small arrow on the lower left side.

Tapping it opens the create checkin post UI, which shows: 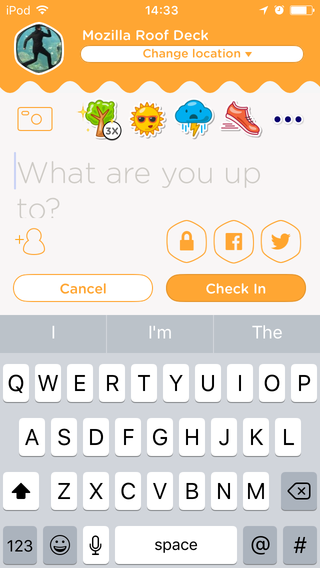 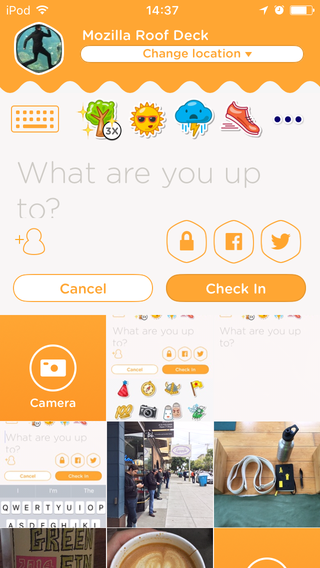 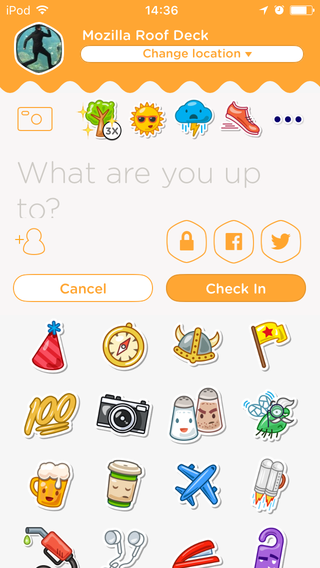 Swarm will occasionally provide notifications in its mobile app to remind you to checkin at places you may have previously missed. This functionality can also be accessed from the user's profile screen typically with the label "#+ to confirm" where the # is the number of locations not checked in at. The list of places visited can be either accepted by clicking on the green location pin icon or the ... "more" indicator can be chosen to modify the location of the checkin; indicate one was there, but not be checked in; or remove the item from one's timeline. 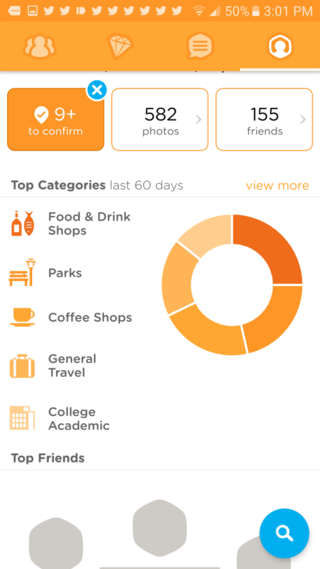 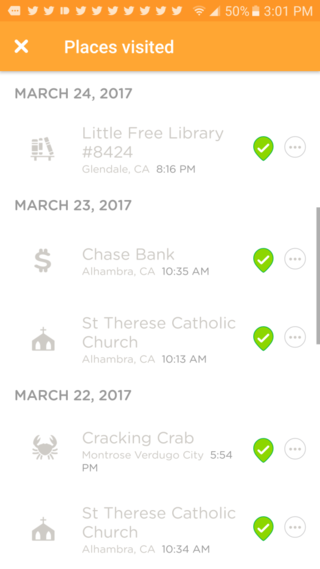 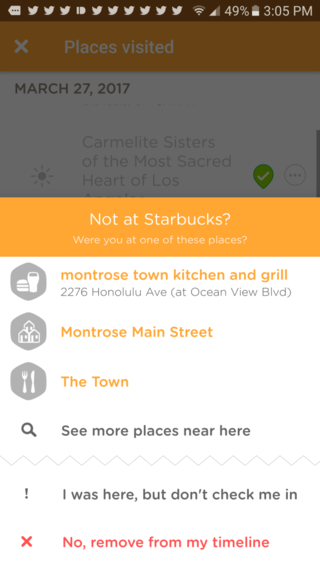 Swarm allows you to check in your friends if they've enabled the feature. When you tag someone in your checkin, a new checkin on their account is created. This is a separate post from your post.

When you check in to a place where you have been checked in by a friend, the post gets updated with the text, photo's and sticker you chose. 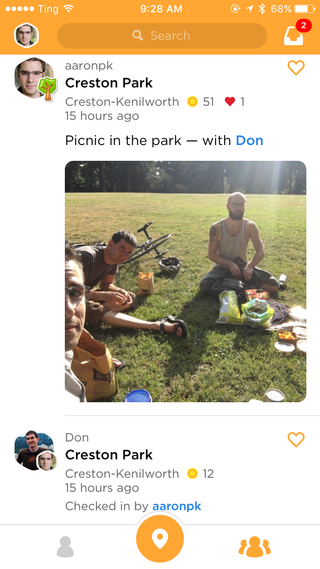 Geocaching.com and other geocaching silos allow players to publish checkins to locations (which can usually be independently verified by the signing of a logbook at those coordinates, or in the case of some silos by acquiring a password from that logbook).

Silos that support checkins (checkin silos) that have either gone away (site-deaths), or dropped checkin as a feature.

Brightkite was a checkin silo.

Fire Eagle was a checkin silo created by the Yahoo! Brickhouse team in August 2008. It stored a user's location and shared it with other authorized services and inspired other future location services. A user could authorize other services and applications to update or access data via API, allowing a user to update their location once and then use it on any Fire Eagle enabled-website. The intention of Fire Eagle was to serve as a central broker for location data. Services which supported Fire Eagle included Pownce, Dopplr, Brightkite and Moveable Type. It was one of the first sites to use the OAuth protocol to connect services together. The service closed circa February 2013.

Gowalla was a checkin silo.

Dodegeball was one of the earliest popular checkin silos (if not the first?). It was acquired by Google in 2005 and shut down in 2009 being replaced by Google Latitude.