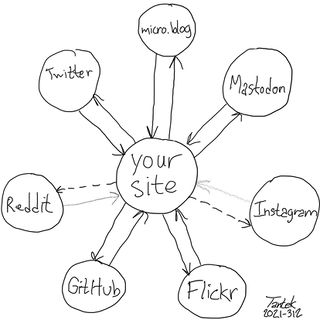 POSSE is an abbreviation for Publish (on your) Own Site, Syndicate Elsewhere, the practice of posting content on your own site first, then publishing copies or sharing links to third parties (like social media silos) with original post links to provide viewers a path to directly interacting with your content.

Let your friends read your posts, their way. POSSE lets your friends keep using whatever they use to read your stuff (e.g. social media silos like Instagram, Tumblr, Twitter, etc.).

Stay in touch with friends now, not some theoretical future. POSSE is about staying in touch with current friends now, rather than the potential of staying in touch with friends in the future. ▶️ watch Zach’s 1min* video intro to POSSE Friends are more important than federation. By focusing on actual social relationships that matter to people rather than architectural ideals, from a human perspective, POSSE is more important than federation. Additionally, if federated approaches take a POSSE approach first, they will likely get better adoption (everyone wants to stay in touch with their friends), and thereby more rapidly approach that federated future.

POSSE is beyond blogging. It's a key part of why and how the IndieWeb movement is different from just "everyone blog on their own site", and also different from "everyone just install and run (YourFavoriteSocialSoftware)" etc. monoculture solutions.

POSSE is considered a robust and preferable syndication model for the following reasons:

Why Link To Your Original

Common POSSE practice is to link from POSSE copies to your original, using a permashortlink. Here are a few reasons why:

In general, when your content posting software posts something, it should also post a copy to the silo destinations of your choice, with an original post link (e.g. permashortlink or permashortcitation) back to your original.

The details of how to do so vary per destination. See the silo-specific sections below.

Once you have posted the copy to the silo, you should:

The best user interface (UI) is automatic, dependable, and invisible. If you can implement POSSEing in a way that always does exactly what you want, predictably, then no explicit UI is needed.

Twitter is perhaps the most popular POSSE destination and a good place to start.

If you can start posting notes (tweets) to your own site and POSSEing to Twitter, instead of posting directly to Twitter, you have taken a big step towards owning your data.

See POSSE to Twitter for details on how to POSSE both notes and articles (blog posts) to Twitter.

Software and libraries to implement POSSE:

Client to site to silo

Client to site and silo

The following IndieWebCamp participants' sites support a POSSE architecture. If you have an implementation, add it, make screenshots or a screencast or blog about it and post the details/link here. In date order (earliest first) :

aaronparecki.com as of 2012-08-19[7][8]. Aaron Parecki implemented POSSE on his site aaronparecki.com with copies posted to Twitter containing permashortlinks back to originals on his own site.

werd.io as of 2013-05-31 [9]. Ben Werdmuller implemented POSSE in his idno platform via plugins. New content has an associated Activity Streams object type; POSSE plugins listen for post events associated with those object types and syndicate appropriately.

glennjones.net as of 2014-01-14 Glenn Jones The blog implemented POSSE using a new version of transmat.io system. New content added to transmat is associated with objects types. A POSSE twitter plugins listens for post events syndicating content. At moment only notes are syndicated.

adactio.com as of 2014-05-27 Jeremy Keith has implemented POSSE using his own custom CMS.

shanehudson.net as of 2014-09-19 Shane Hudson has implemented POSSE to Twitter for Craft CMS.

http://www.ravisagar.in/blog/implementing-posse-my-site Implementing POSSE on my site as of 2018-02-21.

ludovic.chabant.com as of 2018-07-30 Ludovic Chabant has implement POSSE to Twitter and Mastodon from PieCrust CMS, using SiloRider

adamdawkins.uk as of 2019-01-16 Adam Dawkins has implemented POSSE using his own custom CMS.

shaun.net as of 2020-01-16 Shaun Ewing has implemented POSSE using Jekyll, and custom APIs.

capjamesg has been syndicating his notes from his own site to:

This syndication happens automatically whenever James posts a note using his Micropub client or his Microsub feed reader.

... Add a link to your POSSE–enabled site and the date you started syndicating copies of your content out to 3rd party social sharing/publishing services.

Sites which only POSSE some of their content, and still post directly to the same silo they POSSE to.

A similar but opposite approach is PESOS where content is posted first to 3rd party services and then copied/syndicated into a personal site.

If exact copies of content are posted on both a personal site and 3rd party services, there's no way to tell (short of comparing possibly non-existent sub-second accurate published dates) whether a site is using POSSE or PESOS. Sites can provably support POSSE by including perma(short)links in syndicated copies that link/reference back to published originals.

PESETAS is like PESOS but copying/syndicating everything to a particular silo (without any involvement of a personal site).

E.g. Tumblr has a UI for cross-posting to Twitter. See Webapps StackExchange post for documentation and screenshots of UI.

Tumblr is a better PESETAS destination however, since it is well established, allows for a wider variety of content, and allows more text, and links to URLs directly instead of linkwrapping them like Twitter does.

All of the above, and to date (2013-222), POSSE has solely described syndicating the Creation of content on your site (publishing) to other sites. This model has been quite successful and perhaps may be sufficient.

However, it is worth exploring the potential utility of a full CRUD protocol for POSSE.

Create is the POSSE default. You create content on your site, you POSSE your creates to other sites. All of this is described above, and in silo-specific details on silo pages.

Read as a verb is interesting when applied to POSSE.

At a minimum, it's useful to implement storing links to syndicated copies of your content to provide for the future possibility of reading from downstream POSSE copies.

In addition, keeping a u-syndication link to the POSSE copy enables deleting it to perform an Update or a Delete action, as described in the following sections.

If a POSSE destination allows updates/edits, then when you edit your post, you could propagate that update to the downstream POSSE copy as well.

All of these concerns are regarding the experience that you provide to your friends reading your tweets on Twitter, which of course should be the whole (design) reason you're bothering to POSSE to Twitter in the first place.

Deletes seem fairly straightforward to POSSE, especially to services which themselves propagate deletes to clients.

E.g. one can delete a note on Twitter at any point.

Perhaps this is an opportunity for the UI for the deletion of a post to check to see if there's been any activity (replies, favorites, retweets) on the POSSE copy before performing the delete. One possible implementation could involve the UI informing the user of this activity (or lack of it) and reconfirming the delete request on a per-service basis.

Worry about search engines and duplicates

Q: Do we need to worry about search engines penalizing apparently duplicate posts?

This is also an advantage of POSSE over PESOS. With PESOS - there's no way to tell what's the original and what's the copy - so they do look like duplicates.

Q: Brid.gy can use posse-post-discovery to find the relationship between a syndicated post and the original when there is not explicit link. Does this mean I should stop adding backlinks to syndicated copies?

A: POSSEing without a backlink is considered a last resort, and has some costs associated with it. See posse-post-discovery#Tradeoffs for more details.

Articles and blog posts about POSSE, especially implementing it:

POSSE as methodology for non-web scenarios

As discussed #indieweb it is also possible POSSE your git repositories to git "silos", such as GitHub or GitLab. An easy way of doing this was described by